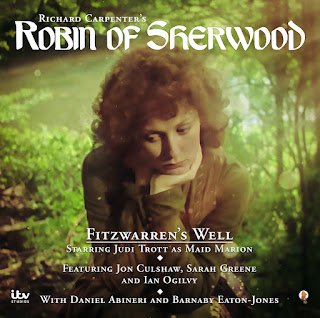 This 45-minute, full-cast tale, released under official license from ITV Studios, is led by original cast member, Judi Trott, as Maid Marion – in an adventure called Fitzwarren’s Well (by acclaimed novelist Jennifer Ash), that echoes what is happening around us as the basis for the story which is set during Series Three of the original TV series Robin of Sherwood, between ‘Rutterkin' and 'The Time of the Wolf'.

Will Scarlet is regretting buying new boots as he walks home from Lichfield, desperate to get back to Sherwood. Unfortunately, Marion intercepts him with terrible news of a sickness that has laid low the rest of the outlaws.

A journey to the Lady of the Well is their one hope.

But the Lady will only help those she deems worthy... and someone is busy convincing her that they are not. 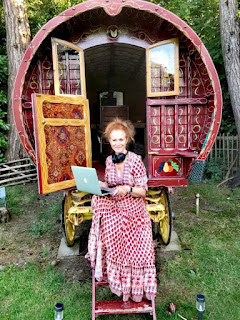 Maid Marion actress, Judi Trott said, “It was so timely being asked to record Fitzwarren’s Well as I had been thinking about things I could do during the lockdown period and felt I wanted to try my hand at recording audios and books, etc, again.

So, when Barnaby rang it was just the encouragement I needed and I promptly bought a professional microphone on his recommendation. I excitedly started going through the script - which is very good – and, to my delight, found Marian had a key role in this one, and had some lovely scenes with Will Scarlet together, which I don’t think in any of the series was ever really written before?

My husband Gary suggested our gypsy caravan in the garden as a little studio and sound-proofed it for recording a one-off lockdown experience which was fun and rewarding, and I hope enjoyable to those who hear it.” 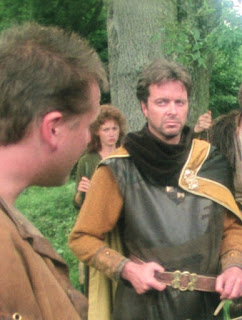 Guest stars include former Return of The Saint hero, Ian Ogilvy, who reprises the role of Lord Edgar of Huntingdon that he played in the original television series episode ‘Rutterkin’ – the nasty Uncle of Robin Hood. He said, "It felt really good reprising my original role in Robin of Sherwood, especially since I felt the character of Lord Edgar was never fully developed in the TV series - and now I've been given a chance in the Audio series to flesh him out, as it were - even if not actually in the flesh."

Joining him is actress and presenter, Sarah Greene (Going Live, Blue Peter, This Morning), as the mysterious and enigmatic Lady of the Well. 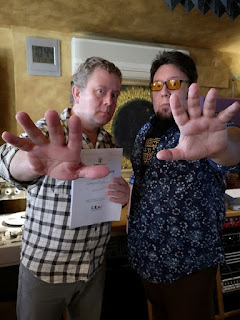 Returning to voice Will Scarlet again, using the gruff and unmistakable tones of original actor Ray Winstone, is noted actor and impressionist Jon Culshaw (pictured above with Barnaby Eaton-Jones), who said, “It was absolute magic and a great honour to step once again into Will’s sturdy boots and take on that raw power of his character. It stays with you long after the recording! I was much more efficient getting my jobs done for the next three days!”

The mystical Sherwood forest shaman Herne The Hunter is once again played by Daniel Abineri, son of the late John Abineri who played the role for the television show.

Creative Director for Spiteful Puppet, Barnaby Eaton-Jones sums up, "In the past, all the original actors have returned for the new audio adventures and we’ve been delighted to have Michael Praed and Jason Connery lead the cast as their respective Robin Hoods.

"However, we were very eager to give Maid Marion her moment in the spotlight and this new audio relies on her bravery, intelligence and guile. It’s been a joy to hear Judi Trott take the lead and she is surrounded by some amazing performances from the likes of Ian Ogilvy, Sarah Greene, Daniel Abineri and Jon Culshaw. The challenges of recording remotely have been something I’ve conquered before with past productions before the recent pandemic, so it’s not new to me but it’s not a simple process. I’ve enjoyed marrying up performances and making sure that it sounds like everyone was in a studio all together and not sat on their own in a makeshift recording booth. All kudos to sound designer and editor, Joseph Fox, who has created miracles in that department.

"I’m also indebted to writer Jennifer Ash, who took my conceptual idea for the story and created a script that is linked so well with the television series and seamlessly fits with the style of the late, great creator and writer of the show, Richard ‘Kip’ Carpenter."

Robin of Sherwood: Fitzwarren’s Well is on general release as an exclusive digital download only, from Spiteful Puppet’s website (www.spitefulpuppet.com) – alongside a range of other Robin of Sherwood audios and books. Listen to the trailer below and we'll have a full review for you soon:

Television series Robin Of Sherwood © HTV/Goldcrest Films & Television 1983. Created by Richard Carpenter, with grateful thanks to his Estate.