CLASSIC DOCTOR WHO ON BRITBOX – The Talons of Weng-Chiang 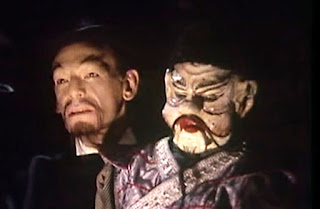 On 26th December 2019, 627 pieces of Classic Doctor Who content were made available to Britbox subscribers. Every Sunday in 2020, our Doctor Who expert, Tony Cross, looks back at some of the classic stories. Here is the Fourth Doctor adventure The Talons of Weng-Chiang ...

Ah, another piece of high-quality Hinchcliffe and Holmes Doctor Who has zipped past. As a six-parter, its pace is slightly more sedate than usual but it never feels particularly slow.

This is Doctor Who as Sherlock Holmes meets Fu Manchu. It's a homage to both - including casual Victorian racism about 'those devilish' Chinese - set in the foggy East End of London Town. Where old ladies watch the peelers drag rat-nibbled corpses from the Thames and the man with the twisted face lurks amongst the opium dens. Where women are disappearing mysteriously from streets leading to rumors of Jack the Ripper's return and the music hall rules. With it's Daisy, Daisy singalongs and preposterous perambulation introducing incredibly inventive acts. It's the Victorian London of a thousand stories: both written and filmed. It's got an atmosphere you could cut with one of Leela's knives.

It also has a thorny issue of the 'Chinese-ing Up' of a white British actor (John Bennett) to play Chinese peasant cum oriental magician Li H'sen Chang. Bennett's good, especially at the moment where the Doctor and Leela come upon him dying in the foul rookery that was Weng-Chiang's base. It feels a little uncomfortable to me because I do wonder whether the production team could have looked a little harder to find a Chinese actor capable of playing the part. This is 1977 we're talking about. However, I may be over-reacting to something. It doesn't affect my enjoyment of the story much but I would love to know how a Chinese person watching this would feel.*

As I said Bennett does do a good job and he's not the only one. There's a fine pair of perfect performances from Christoper Benjamin as Henry Gordon Jago and Trevor Baxtor as Professor Litefoot. Jago is the owner of the theatre and is fond of elongated words with a tendency to mild cowardice. Litefoot is a pathologist with a thick skull, some experience of China and a bit more bravery than Jago. Kept separate until Episode Five they make a fine couple. So fine that Big Finish have done two series of adventures for one of Doctor Who's most three dimensional character pairs given life through the excellent writing of Robert Holmes.

Holmes is often talked about the best writer of Doctor Who and with something like Talons you can see why. There's a decent plot, a dash of technobabble and futurebabble, wit and intelligence. There's quotable lines.

The main villain of the piece is Magnus Greel, a time-travelling war criminal from the 51st century with a skin problem & a Peking Homonculous for company. Greel is played by Michael Spice (last heard of as the voice of Morbius in The Brain of Morbius) and is one of those Doctor Who villains driven to the edge by their situation. He stays just the right side of hamminess except one or two scenes of unnecessarily manic 'bad guy' laughter.

The Peking Homunculus (Deep Roy) is first introduced to us as Li H'sen Chang's ventriloquists dummy.

There's something creepy about vent's dummies full stop. Just see either Dead of Night (a brilliant piece of portmanteau British horror from the 1940s) or Magic starring Antony Hopkins to prove my point. When the vent's dummy turns out to be a homicidal robot with the cerebral cortex of a pig that makes it even more horrible.

Tom Baker is again great in this, being enough of a Sherlock Holmes to convince someone to let him have a shot at playing the part in a television adaptation, which did not go well.

Louise Jameson also does another lovely job as Leela as she is dropped into a world she doesn't understand. She's an SF Eliza Doolittle and she gets some great comedy scenes with Litefoot, including a lovely little moment involving a discussion about how many sugars a lady should have in her tea. She also gets some proper action sequences. She also gets chased by a giant rat in her underclothes.

Ah...now I have mentioned them let me just say that yes, the giant rats are not the most convincing of monstrous creations but director David Maloney generally does a good job of hiding the worst of their 'men in suitness', although not totally.

We'll gloss over those damn rats though as a minor quibble in a story with many exceptional qualities and well worth a watch if when you get the chance.


* Since I wrote this article the question of The Talons of Weng-Chiang's racism has become a sore point in fandom. Some people, notably Elizabeth Sandifer, have basically said that if you like this story you're a racist. It is definitely more problematic that my review hints at because there's a feeling that the story doesn't question the assumptions of the source material it is homaging enough. This story also seems to get more questions asked about it than either Marco Polo or The Crusade but perhaps that is because both these stories are from the Hartnell era and perhaps because neither story using racial stereotypes in quite the way this one does. Perhaps the fact that The Talons of Weng-Chiang is held up as a paragon of its era makes it more deserving of criticism. I won't pretend I don't like this story a lot, but I'm also aware that you can't watch this and not ask yourself questions about its portrayal of Chinese people (and history.)