CLASSIC DOCTOR WHO ON BRITBOX – The Horror of Fang Rock 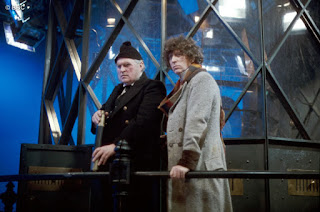 On 26th December 2019, 627 pieces of Classic Doctor Who content were made available to Britbox subscribers. Every Sunday in 2020, our Doctor Who expert, Tony Cross, looks back at some of the classic stories. Here is the Fourth Doctor adventure The Horror of Fang Rock ...

Season Fifteen kicks off with a delightful little 'base under siege' story, The Horror of Fang Rock.

There's a new producer with Graham Williams replacing Philip Hinchcliffe but Holmes is still script editor and this does have the feel of a Hinchcliffe and Holmes era story as it is played pretty straight as a tea time horror story.

On an early 20th century island there is a lighthouse. The story starts when Vince (John Abbott), one of the three lighthouse crewmen spots a shooting star. The other two are Ben (Ralph Watson in this his third Doctor Who appearance, this time without badger wig but with an impressive moustache) and Ruben (Colin Douglas), who is an old-fashioned, superstitious sort of cove.

Alas the shooting star has bought along a nasty little green testicular blob that starts the nastiness by bumping off Ben. It is, of course, at this point that The Doctor and Leela, off-course because of fog, arrive. As is traditional they are suspected of something bad but the arrival of a luxury yacht, which smashes into the island changes the whole situation.

There are apparently only four survivors: Harker, a crewman (Rio Fanning); Lord Palmerdale (Sean Caffrey); Colonel Skinsale (Alan Rowe), and Adelaide, Lord Palmerdale's secretary (Annette Wollett). These four have problems of their own.

Gradually, one by one, the occupants of the lighthouse die at the hands of the nasty green blob. It's a 'base under siege' story par excellence whilst also being a distorted reflection of The Sontaran Experiment. Like the Styre the Sontaran, our Rutan is a scout from a ship testing the Earth waters - so to speak - before the rest of its fleet arrives. The Doctor hopes that by destroying the Rutan scout and his mothership then it'll scare off the rest of the fleet.

It's a claustrophobic tale, which I remember terrifying me as a child. Even now though it keeps up a sustained level of tension throughout.

The characters involved, even the minor ones, are well-played. Some are sympathetic: Vince in particular (whose death upset me a lot as a kid and still made me a little sad now) but Harker too.
Some are unsympathetic: Lord Palmerdale who is described by Leela as 'the cowardly one'. He's a nasty little capitalist on the make. Skinsale to is an MP on the make but we are made to like him before his greed is responsible for his death. Adelaide is played as an excellent counterpoint to Leela. She flaps, she screams and she faints. No one seems to have much sympathy for her. Leela slaps her, tells her to be silent and the Doctor shouts at her.

A round of applause to for Colin Douglas's Ruben, especially for the horrible look of glee he has when, as the Rutanised Ruben, he moves in to kill people.

The Doctor is a grumpy sod in this story. Stories of its production seem to indicate that Tom and director Paddy Russell did not get on and that the atmosphere stank. Tom seems to be channeling that into his performance. He's very intense throughout and on occasions borderline terrifying. Or he would be if you were stuck in a lighthouse squeezed between him and a glowing green testicle.

Louise Jameson is excellent again. I've really warmed to Leela as a companion and she interacts brilliantly with Tom. She also still has a nice fire to her. The scene at the end when she celebrates killing the Rutan by taunting it being a particularly interesting little moment, although the Doctor doesn't approve naturally.

Are there any faults? A few quibbles, Adelaide's death is confusingly directed; the blob's climb up the lighthouse looks wrong and the Rutan mothership is a pretty cheap effect but none of these take anything away from another good, solid Doctor Who story.