CLASSIC DOCTOR WHO ON BRITBOX – The Invisible Enemy 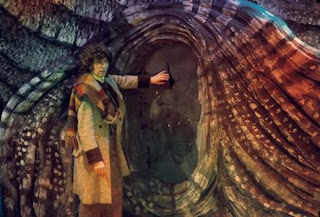 On 26th December 2019, 627 pieces of Classic Doctor Who content were made available to Britbox subscribers. Every Sunday in 2020, our Doctor Who expert, Tony Cross, looks back at some of the classic stories. Here is the Fourth Doctor adventure The Invisible Enemy ...

This is the first story with a Graham Williams' touch. It's the beginning of the era of 'imaginative silliness' which will probably reach its heights (or depths depending on your point of view) in Season 17. I shall not leap too far ahead of myself though.

The Invisible Enemy is one of those stories that fan lore labels as not particularly good, possibly awful.

I'm not sure that's entirely fair. I think there's a lot of good things about this. It's pacey, the first couple of episodes work well and 'contact has been made' makes a nicely creepy catchphrase. The idea of a nasty virus sitting out in space waiting for a suitable species to infect is also quite nice. As is the quest inside the Doctor's brain until...until...the Nucleus of the Swarm appears.

Now I've got a high tolerance for dodgy special effects but (and it is such an easy target) that big bloody prawn that appears at the end of Episode Three and lasts through Episode Four is flipping ridiculous. It's up there with the Magma Beast and the Myrka...in fact, I think it is possibly the worst monster in Doctor Who history.

It worked better as an idea than an actuality.

I've talked before how the legs (or walks) are often the big dodgy factor with Doctor Who monsters but the Prawn can't even walk! Inside poor old John Scott Martin is flapping claws like a good 'un but he's having to be pushed around by a couple of actors.

Even the Zarbi can walk.

They do try and fob it off by giving the Doctor a good line about the creature struggling with its new size but it doesn't help because in the end: it's an IMMOBILE PRAWN.

There's also a couple of moments where a lack of... time... or even care is on display, perhaps the most notorious being K9 blowing up a bit of wall that's already obviously cracked. Apparently, this was because they wanted a re-take but it's a pretty shoddy job. It's moments like that where Doctor Who's reputation for cheapness was born. In fact, I think Doctor Who's budgets, whilst tight, weren't so much the key problem. Lack of time - which I suppose is a symptom of lack of money - is the main problem.

Old Doctor Who seems to have been made under a great deal of time pressure and when you're dealing with a programme containing lots of special effects that lack of time leaves you open to having to just put up with whatever you get. Especially if a director is more focused on the actors, not the effects which is what Derrick Goodwin - who directed this - was apparently.

It's reflected in some slightly 'stringy' model rocket work. The make-up given to the 'contacted' isn't brilliant either. In particular, Michael Sheard's Hitler moustache / Dennis Healey eyebrows combination grabs the eye but it is nice to see Sheard again though and his performance as Lowe is up to his usual standards.

The other nice performance in this is Frederick Jaeger's Professor Marius. Head of the Bi-Al Medical Foundation and the creator of K9.

Ah, yes this is K9's first story. How could I forget? The first thing you notice is what a noisy bugger K9 is. His motors whirr away and he bumps along quite nicely. It's a sweet little thing but what brings K9 to life is John Leeson's excellent vocal performance. K9 sounds like a fusspot academic who despite being a robot develops a nice line in smart-arsery.

Back to Frederick Jaeger. It's an indication of the difference in stories and in producers that he's played more light-heartedly than Jaeger's Professor Sorenson in Planet of Evil. The line about whether K9 was properly 'TARDIS trained' wouldn't have got near a Hinchcliffe story (neither would K9 I suspect).

Even with all those criticisms and the STUPID PRAWN THING it still rattles along nicely. I know that my six year old self didn't let the effects get in my way so it shouldn't be dismissed entirely out of hand. It is however probably the least effective story since Revenge of the Cybermen, which by Tom Baker's standards so far makes it a bit of a dud.