CLASSIC DOCTOR WHO ON BRITBOX – The Androids of Tara 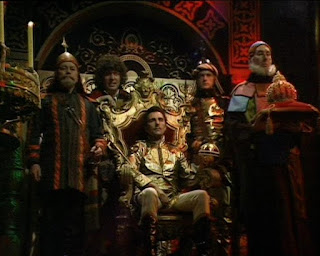 On 26th December 2019, 627 pieces of Classic Doctor Who content were made available to Britbox subscribers. Every Sunday in 2020, our Doctor Who expert, Tony Cross, looks back at some of the classic stories. Here is the Fourth Doctor adventure The Androids of Tara ...

That was a wonderfully entertaining piece of Doctor Who fluff, although I believe the correct term is 'romp'. A highly enjoyable Doctor Who 'homage' to The Prisoner of Zenda by Anthony Hope with android doubles - as well as a Time Lord one.

It isn't the Doctor who has a double on Tara. It is Romana who is the spitting image of the Princess Strella, which might not have mattered too much if it was not for the fact that she falls into the hands of the magnificently evil Count Grendel of Gracht (Peter Jeffrey) and becomes part of his nefarious plan to steal the Kingdom from Prince Reynart, the rightful heir.

Count Grendel has already kidnapped the real Princess Strella and is holding her prisoner in the dungeon of his quite beautiful castle. His original plan, assisted by his peasant engineer and apparent lover Lamia (Lois Baxter), was to have an android copy of the Princess kill the Prince on his coronation. This the Doctor foils and so the Count comes up with an alternative plan involving Romana, the Prince, and a wedding. Followed by a funeral (of the poor Prince), another marriage (the Count to Romana/Strella) and a final tragic accident (to Romana/Strella) all of which machinations would make Grendel King. It sounds more complicated than it actually seems when you write it down.

The Doctor, of course, gets involved, stops the Count's plans and rescues everyone. Hurrah! Unusually the Count escapes, in a lovely moment on top of the battlements, running off to fight another day we can assume.

This script - by David Fisher - is quite lovely, even if the plot is basically that of The Prisoner of Zenda. It zips along with intelligence, charm, and wit.

It's also quite light on special effects, which makes a refreshing change. It's location helps create the right vibe for the story. It is filmed in and around the quite beautiful Leeds Castle (which is actually in Kent but let's not dwell on that) and makes the story feel a bit more vivid.

Alas there is a small blip. The Taran Wood Beast is a bit rubbish but as the poor furry thing only appears for about two minutes in Episode One I can certainly forgive its slightly forlorn appearance.

The best thing about this story though is Peter Jeffrey who plays Count Grendel with sophisticated & underplayed menace. His threats, although clearly real, are made with Roger Delgadoesque's coolness. He doesn't do much shouting and seems to be having a wonderful time, without ever charging over the edge into ham. This was Peter Jeffrey's second Doctor Who appearance, of course. He had been in The Macra Terror with Patrick Troughton.

Talking of returns it is also nice to see Cyril Shapps again in his fourth Doctor Who story as the slightly ineffectual Archimandrite. Unusually for a Shapps appearance, his character doesn't get killed off, which is nice.

I should also give Lois Baxter a nod for her performance as Lamia. Lamia might be an android engineer but on Tara, that makes her a peasant. This means that although she and the Count are lovers (or at least that's the obvious hint) she will never be his wife. There a depth to Lamia that makes her death in episode three appear a little cruel. In fact I'd go as far as to say the Grendel - Lamia relationship is one of the series sadder sub-sub-sub plots. It's barely in the text but it is there in the performances.

The stories good guys: Prince Reynart (Neville Jason); Zadak (Simon Lack) and Farrah (Paul Lavers) get less to do, as is the fate of the good guys. Although they are all perfect for their parts, especially Neville Jason who has the looks of a 30's movie star and is therefore perfect in what is the Douglas Fairbanks Jr role and Paul Lavers gets some nice business with Tom Baker in the early episodes (which includes cutting a chunk off of the Holy Scarf).

Tom Baker is good in this to. His eccentricities kept reined in but clearly having a ball. His long swordfight with Peter Jeffrey in the final episode is a nice nod to the Hollywood swashbucklers of yore.

Mary Tamm gets to play four parts: Strella, Romana and the android Strella/Romana. This would have been fun I suspect but I think the director missed a beat for whilst Tamm's performance as the androids are nicely different to her normal Romana performances, Strella and Romana are too alike. The voices are the same and so Strella is basically locked in a cell doing needlepoint (or whatever) so doesn't really get too much to do.

It's a tiny bit of a waste really. But this is just a quibble. This is a fun story to watch.