CLASSIC DOCTOR WHO ON BRITBOX – The Power of Kroll 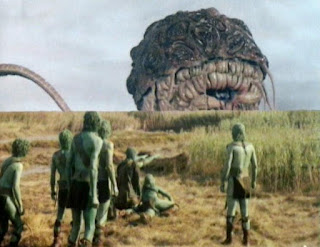 On 26th December 2019, 627 pieces of Classic Doctor Who content were made available to Britbox subscribers. Every Sunday in 2020, our Doctor Who expert, Tony Cross, looks back at some of the classic stories. Here is the Fourth Doctor adventure The Power of Kroll ...

I'm not going to pussyfoot around here. This is pretty rubbish stuff, especially for a Robert Holmes script. It's definitely the dud of the Key to Time Season so far.

There are some good bits: the scenes in the Suffolk swamps look good; Tom Baker and Mary Tamm put in good, solid performances and it has both Philip Madoc and John Abineri in it but whilst Abineri does the best with what he's given - especially as he's painted green! - Madoc's heart just doesn't seem to be in it. He's not even the main villain, which is such a waste of his talents. Instead, that part is played by Neil McCarthy, who does a competent enough job.

I think the actors playing the crew of the methane engineering plant - yes, it's that exciting a location - are hamstrung by being asked to deliver chunks of explanation whilst conveying oodles of seriousness. What this means is there are far too many scenes of good actors shouting at each other, standing with their hands on hips and staring meaningfully at computer screens. It's a waste of all their talents really.

I should note that we get to see John Leeson - the voice of K9 - in the flesh as Dugeen (the liberal wishy-washy one of the methane engineers). He gets a nice death scene, shot by Neil McCarthy's Thawn and dying with a look of shock, surprise, and disappointment on his face.

Thawn's a nasty piece of work. He's in cahoots with arms smuggler Rohm-Dutt (Glyn Owen) to set up the Swampies so he can wipe them out. He doesn't see the poor, green Swampies as 'civilized' and wants them out of the way so that they can get on with exploiting the resources available to him. But unfortunately he never quite gets above the level of boring minor psychopath.

The Kroll itself is a 140ft tall pseudo-Octopus. It's a brave challenge for late 70's Doctor Who and it doesn't quite work. Partly because of the poor split-screen work when it is required to appear with others and partly because tentacles don't work in Doctor Who. (One day I'll write extensively on this but see Spearhead from Space for another dodgy example).

The Swampies also illustrate another Doctor Who flaw. The use of nice BBC actors to portray the religious rites of 'primitives'. A gathering of Equity types painted green waving spears does not a convincing scene make I'm afraid. John Abineri plays the leader of the Swampies and does a sterling job considering how ridiculous he is made to look. There is an innate gravity and dignity to Abineri, which shines through even under a coating of green paint.

Basically, it is a dull runaround, flatly directed and featuring too many good actors given too little to do. There's a political story - about racism and colonialism - in here struggling to get out and as The Sun Makers shows when Robert Holmes gets satirical he's sharp and funny. Maybe the problem is just that Kroll is too bloody serious, which makes it worthy but boring.

It is Robert Holmes's only real Doctor Who dud (although The Space Pirates isn't great either) it brings the momentum of the Key to Time season to a shuddering halt just before the six-part climax: The Armageddon Factor.