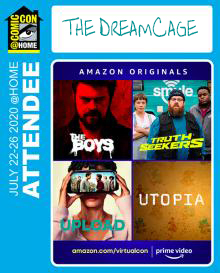 It's the final day of  SDCC@Home today and Susan Omand shares her pick of events she's looking forward to, before they happen....

With the global pandemic still being a thing, San Diego Comic-con has had to go online this year, same as everything else. So that means we mere mortals who never get to go to it usually, get a chance to access some of the online panels, Q&A's and other exciting stuff without having to wait in line for ages and ages and ages and ages and [yes, we get it - Ed] or, ya know, going to San Diego or anything.
It's the final day of SDCC@Home and it seems to have been a great success. There's much more still to come today though and here's what took my eye:
Animated Illustration

The internet is now the primary tool for artists and designers. Illustration has a new level of demand because of the internet, animated or interactive, and this lecture will cover some of the basic needs for this new 21st century illustrator and the tools it will take to make the art. We will look at the adjustments an illustrator would need to take to seamlessly add this to their workflow.
When I'm not writing articles for DreamCage Media Group, or earning a crust in my day job, I am an artist working in digital media. So this could be a bit of a busman's holiday but I could also pick up some new hints and tips.
Next

Coming to FOX in Fall 2020, Next arrives at Comic-Con@Home with a sneak peek of the thrilling opening scene of the propulsive, fact-based thriller about the emergence of a deadly, rogue artificial intelligence that combines pulse-pounding action with an examination of how technology is invading our lives and transforming us in ways we don't yet understand. Next stars John Slattery (Mad Men) as a Silicon Valley pioneer, who teams with cybercrime agent Fernanda Andrade (The First), to fight a villain unlike anything we've ever seen.
I must admit that I'd never heard of this series coming before this panel. Interesting concept, interesting cast. Interested.
State of the Tabletop Industry

We're huge fans of VE Schwab's work here at The DreamCage and the move to visual media is an exciting one. Keen to find out more.

Aztec Depictions in Pop Culture: 500 Years After the Fall

The Aztec Empire fell to Spanish invaders 500 years ago. It's a true story that shaped the world we live in and yet is still widely misunderstood. Panelists will talk about how they use elements of Mexican history in their stories and how our understanding of that history has evolved.
OK, a bit random I know, but it is a fascinating area of history that still has a lot to be uncovered and it will be intriguing to dig the facts out of the fiction here.

Red Dwarf: The Promised Land
Chris Barrie (Lara Croft: Tomb Raider), Craig Charles (Coronation Street), Robert Llewellyn (MI: High), and creator/director Doug Naylor (Spitting Image) discuss all things Red Dwarf including the upcoming Red Dwarf: The Promised Land launching on BritBox today.
I have a confession. I'm not the hugest Red Dwarf fan in the world. The early series were good, although very "of their time" now, and the later series lost a lot along the way. However, I know folk are excited for this so this is just a reminder that it's on. 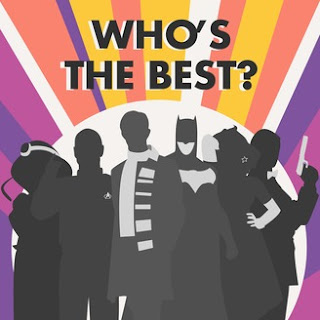 Who's the Best Doctor Who?

From Gallifrey to the Gaslamp District, Whovians have long debated the best Doctor Who. This opinionated panel settles the argument. SD Who Con bring the lively discussion and ends in the result of a public vote by Who's The Best podcast listeners over which of the 13 (or more) should take the title.
"Settles the argument" eh? Causes the argument more like. There is no definitive answer to this [yes there is - Ed] but the debate should prove lively indeed.
A Conversation with Nathan Fillion

It's Nathan Fillion. Therefore I'm there for it.
Wakanda Forever! The Psychology of Black Panther

It may be July, but Christmas is in the air! People love the holidays and have fond memories of various Christmas media, from watching A Charlie Brown Christmas to listening to "All I Want For Christmas Is You" by Mariah Carey to debating whether The Nightmare Before Christmas is a Halloween or Christmas movie. Christmas movies and television shows come from every genre such as horror, science fiction (anyone remember the Star Wars Holiday Special), to classic stories with Santa Claus. Christmas media is so popular that some television and radio stations run Christmas marathons and specials 24 hours a day during December. What are the psychological aspects about our personality that influence returning year after year to those favorite holiday classics and the desire to experience new Christmas media? Keith W. Beard, Psy.D., April Fugett, Ph.D. (professor of psychology, Marshall University), Britani Black, Psy.D. (Marshall University School of Medicine), and graduate assistants Casey Collins and Jake Bass, M.A., conducted a national survey to identify what are people's favorite Christmas movies, TV shows/specials, and songs. Additionally, we examined participant's personality, as well as their world beliefs to investigate what aspects of our personalities and attitudes draw us to these old and new Christmas classics. Results from the study will be presented along with an overview of the psychological theory behind the pop culture research.
What can I say? I don't do Christmas in December but am fully behind Christmas in July. So much so that we did a theme day on it a few years back on this very website.
Everyone's a Critic: Being a Journalist in an Online Age

Panelists include Bill Watters (contributor, ScreenRant, SYFY Wire, Nerdbot), Mary Anne Butler (news editor, Nerdbot), Thomas Parham (professor of communication and media at Palm Beach Atlantic University), Alan Ng (editor-in-chief, FilmThreat), Bob "Movie Bob" Chipman (movie critic, The Escapist), and Alexandra August (contributor, CBR, ScreenRant). The past decade has seen an explosion in the scope of journalism-from the rise of citizen-journalism to blogging to vloggers, podcasters, and online-only news sources. This panel of writers and hosts will talk about the impact that 2020 has seen on film and streaming releases, impacts on fandom, and the companies that create them. Panelists will touch on recent releases and what they expect out of the upcoming months as people settle in and discover what the "new normal" might entail.

This may well be another busman's holiday for me but it will be fascinating to get a different take on the industry and its future.
Public Domain Comics: From Sherlock Holmes to Mickey Mouse and Beyond
The rich history of comic series, characters, creators and stories don't disappear into history thanks to laws governing public domain intellectual properties. By looking at the public domain status and history of properties like Sherlock Holmes, Mickey Mouse, Amazing Man and many others we can learn much about preserving history and making old things new again.

Hmmm. A knotty one to end on I think. I'm a stickler about copyright and IP issues and am not always enthusiastic about people taking classic characters in new directions, even when it is allowed by law. As the saying goes, "just because you can, doesn't mean you should." So I'm going to watch this one and tut loudly.

These are just my choices though, and merely scratch the surface of a busy day. You'll find a lot more on offer as Comic-Con@Home 2020 will feature over 350 separate panels spread out over all five days of the event. There will be something for everyone! You can find the schedule for all of SDCC@Home here or here. Also remember to Print off your badge here (for you AND your pets!) and download your FREE souvenir book here. Oh, and remember to visit the virtual Exhibitors' Hall too where you’ll find company listings, exclusive products for sale, promotional links, and a whole lot more. The Exhibit Hall will be available for all five days of the convention.
Here’s how SDCC@HOME works:

The majority of the panels will also be available AFTER the July 22-26 dates, although there are some that may have a limited time period attached to them. Each panel will contain a link; when you click on that link, you’ll launch another page that has the panel video embedded on it … that video will be available on the date and time listed. When it’s available, simply push play and watch! It’s that simple.