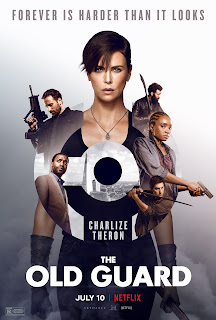 With the film now available to stream on Netflix, find out more about how writer Greg Rucka adapted and updated his own comics for The Old Guard...

Led by a warrior named Andy (Charlize Theron), a covert group of tight-knit mercenaries with a mysterious inability to die have fought to protect the mortal world for centuries . But when the team is recruited to take on an emergency mission and their extraordinary abilities are suddenly exposed, it’s up to Andy and Nile (KiKi Layne), the newest soldier to join their ranks, to help the group eliminate the threat of those who seek to replicate and monetize their power by any means necessary. 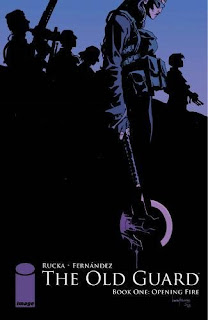 Published in 2017 by Image Comics, The Old Guard was written by prolific comic book author and screenwriter Greg Rucka (Wonder Woman, Lazarus, Stumptown), whose award-winning work has also straddled both the DC and Marvel universes. All of the volumes in the series are illustrated by acclaimed Argentinian artist Leandro Fernández (Punisher, American Carnage, The Discipline ).

When the story was initially conceived, Rucka had set out to write a rollicking story that enabled him to have a little fun with the characters in a manner that only comics can provide. But he soon realized the story was also helping him work through his own thoughts on deeper issues. “In a way, The Old Guard is like a Looney Tunes cartoon because you can blow the characters up, you can hit them with a truck, you can drop them off a cliff, and they get up and keep going,” he says. “But halfway through, I realized that the real reason I was writing it was because I had lost my father recently and was trying to rationalize the necessity of death. Why do people have to go? Why do they have to leave and what happens if you can’t? The story delves into and explores the flip side of immortality. What it truly means to live forever, how that impacts the character's sense of family, and how they live without the knowledge that they will die someday.”

According to Fernández , “these people see everyone they love die. It must be so hard to continue, but the characters move forward and they affect change in generations in the process. But there has to be a deep feeling of loneliness within each of them.”

“The story continued to surprise me,” says director Gina Prince-Bythewood. “I knew within five minutes that I had to do it. It moved me. I don't know that you always get that in this genre, and I felt it was a way to disrupt the genre, elevate it, and do something different and special.” 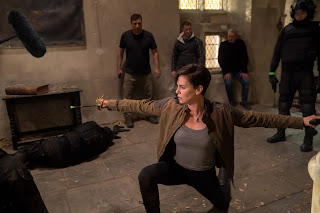 When it came time to polish the screenplay, Prince-Bythewood collaborated with Rucka on enhancing a few storylines in order to better serve the medium of film. “The graphic novel was always specifically Andy's story," says Rucka. “But when it came time to adapt the novel as a screenplay, one of the first notes I got was that Nile, in particular, was not well served. And the second I got that note, I knew they were right. It’s been remarkably beneficial in writing further comics, just because it forced me to do a lot of character work.”

Prince-Bythewood pushed hard to have Nile’s character integral to the third act to give her more agency. “One of the things that was important to add to Nile and Andy’s characters was the fact that killing was not an easy thing for them,” says Prince-Bythewood. “It's not something that you do and forget, which I think you see often in this genre, where you kill somebody, make a funny quip, forget about it and move on to the next set piece. It was important to me to show the reality of soldiers and what the toll of taking lives does to you.”

This decision influenced in particular a scene in the final act of the film where the camera stays on Nile in real time as she ascends 15 floors in an elevator, knowing what she's about to do in order to save her new family. “Knowing the importance, having seen the good that the Old Guard does, she understands now that they take a life to save a life.”

Prince-Bythewood additionally paid homage to Fernández’s original illustrations by incorporating some notable shot-for-shot images in the film. “The use of silhouette was something that I absolutely took from the novel,” says Prince-Bythewood. “When the Old Guard are walking along a ridge, or approaching the bunker leading up to the kill room scene, and you see the four of them in silhouette, that’s all Leandro.”

“The work that I do as a comic artist isn’t only about the drawings,” says Fernández. “The way I see it, it’s more about how to tell the story. The artist is the one who decides how to show the script that’s been given to him. Every single detail on the visuals of the comic book is there because it’s meant to be there. It’s not only about showing what’s happening, but showing the right emotion.”

“In comics, it's not enough to know how to draw," says Rucka. “You have to know how to tell a story visually. Leo loves to play within his art, and his choices on how to compose and move from one panel to another are vital to the fluidity of the story.”