CLASSIC DOCTOR WHO ON BRITBOX – Image of the Fendahl 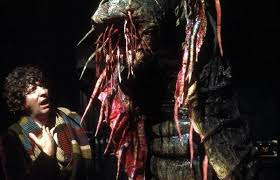 On 26th December 2019, 627 pieces of Classic Doctor Who content were made available to Britbox subscribers. Every Sunday in 2020, our Doctor Who expert, Tony Cross, looks back at some of the classic stories. Here is the Fourth Doctor adventure Image of the Fendahl ...

I'm a big fan of this story, always have been and I suspect I always will be.

Chris Boucher, who wrote the rather excellent The Robots of Death, has created another pretty good story. It's not quite as wonderful as that story but I'll put that down entirely to the slightly pointless trip to the Fifth Planet in episode three, which is essentially pure padding. Nonetheless I love this story. It feels like a real horror story. With a bit of editing and the cliffhangers removed it would make a nice British horror flick.

The strong cast - Denis Lil as Fendelmen; Wanda Ventham as Thea; Edward Arthur as Adam Colby; Scott Fredericks as Max Stael (who is the megalomanic lunatic of the week); Geoffrey Hinsliff as Jack Tyler...oh and please be upstanding to give a bumper round of applause to Daphne Heard as Ma Tyler. It is one of my favourite ever performances in Doctor Who. Whilst the accent might be pure Mummerset the performance is so good you find yourself wanting more scenes with her in. It's a gem.

Image of the Fendahl is an unusual Doctor Who in that a lot of scenes don't involve the Doctor or Leela at all. It is the guest stars play off of each other driving both drama and plot. It feels unlike a Doctor Who story at all in some ways. Everyone but Colby also gets a moment when the horror of what is happening - or might be about to happen - dawns on them.

Thea, when talking to Adam in the lab; Doctor Fendelman when he tries to persuade Max and Co not to go through with their actions and Max himself when he asks the Doctor to pass him the gun. For Fendelman and Max, this realization ends in their deaths. For Thea there is a different fate. She gets to flit around painted gold turning people into Fendahleen.

I'm not sure whether the Fendahleen work or not. I remember as a six-year-old being absolutely terrified with the cliffhanger to Episode Three but it looks less terrifying now. This I'm going to put down to old age and cynicism. It perhaps needed to be a wee bit slimier. This is the classic example of the fear coming more from anticipation and hints than the final sight of the creature. Even now though it didn't really affect my enjoyment of the story, which is anchored in acting and script rather than special effects.

As I've worked my way through these stories it slowly dawns on me that it is the performances and the words that have always been the appeal to me of Doctor Who. There might be a lot of technobabble and futurebabble. There might be occasional moments of blandness and stupidity but if you get a script with intelligence and wit combined with actors who deliver on the performance front, even when faced with the silliest and stupidest special effects then you get something wonderful. The special effects have never really mattered. It's nice when they are done right and when they look great but it was never about that. It's about the Doctor and his friends saving the Universe with wit, charm, style and the minimum about of violence necessary.

I should also pay homage to Tom Baker and Louise Jameson again. Tom is great when displaying what I can only describe as intellectual power. Taking control of a situation through words. Making people listen to him by force of character alone.

Louise Jameson does a great job of keeping Leela from becoming a cipher. There's some lovely scenes between the two of them throughout. It's a nice Doctor and Companion relationship and it is a shame it wasn't to last much longer.

So minor quibbles aside I love this story as much now as I did when I first watched it all that long, long time ago.