CLASSIC DOCTOR WHO ON BRITBOX – The Sun Makers 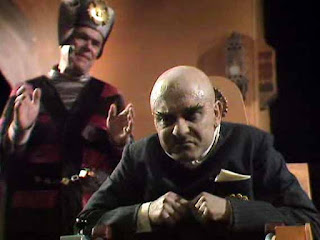 On 26th December 2019, 627 pieces of Classic Doctor Who content were made available to Britbox subscribers. Every Sunday in 2020, our Doctor Who expert, Tony Cross, looks back at some of the classic stories. Here is the Fourth Doctor adventure The Sun Makers ...

The Sun Makers is brilliant. It might all be tower blocks, corridors and slightly over-large rooms with flashing lights but this is a work of Robert Holmes at his best. The script balances semi-regular peril for the main cast with adult cleverness, including sneaky references to P45s. On the other hand, you could argue it's a magnificent two fingers at HMRC written by a man facing a rather large tax bill and is therefore just a selfish call for tax avoidance. You decide.

Basically, The Doctor flexes his revolutionary muscles and brings down a rapacious corporate imperialist regime keeping the human race in tax slavery on Pluto in less time than it takes to cook a Christmas pudding. From the moment he and Leela prevent Cordo (Ray McReady) from throwing himself off the roof in despair at his inability to pay his father's death taxes the Doctor is rolling along in anarchist joy.

Leela also gives heart to a people kept in slavery by a combination of ridiculous taxation, an atmosphere filled with a drug to keep people suppressed and the employees of the company desperate to drive profits.

As usual a good script brings out some excellent performances but I think there are two highlights. Firstly, Richard Leech's pompous, obsequious and egotistical Gatherer Hade. Hade is a bastard child of all those Pertwee era bastions of smuggery that are the British Civil Service. It is a performance that borders on pantomimesque but stays mostly on the right side of ham. It is helped by his costume, which makes him look like a giant humbug.

Secondly, there is Henry Woolf's oleaginous Collector, who heads up the Company's operations. He's a nasty little squit. All chrome dome and gurgling. It's his voice, which reminds me a bit of Sil, that is the highlight. It's high-pitched and whiny. It's snide, nasty and when he needs to be pathetic. It's not naturalistic but pray how else would you play a sentient seaweed that's taken on human form. There's a lovely moment when he's confronting the Doctor where he reaches across a strokes Tom's voluminous curls that is beautifully timed.

I should also note the appearance of Michael Keating as Goudry. Keating, of course, is better known as Vila in Blake's 7. Vila was always my favorite character in Blake's 7 so it's nice to see him here.

What's great about a lot of the characters in this is the way their encounters with the Doctor and Leela seem to wake them up from their proletarian slumbers. It helps of course when important parts of the infrastructure are looked after by two blokes. This being late 70s Doctor Who I'm afraid the baddies look shockingly understaffed. But the Doctor is a whirlwind of revolutionary leadership here interfering like it is going out of fashion.

It's an eminently quotable script to, almost as witty as The City of Death. This is also the first story that feels Graham Williamsy. There's less violence, less horror and more wit. I imagine at the time it was the sort of story fans whined about for being 'silly', forgetting for that Doctor Who did virtually out and out comedy with The Romans or The Myth Makers.

What it does do though is make one realise the importance of actors playing it straight. The Sun Makers works because everyone acts as if they are in something serious. The minute actors start playing silly buggers because the story seems silly is when things go to pieces.

I could waffle on all day about this. It never really comes up high on the list of great Doctor Who stories this but it should do and it was even better this time around for me than the last time.

In fact I could quite happily watch it again now.