CLASSIC DOCTOR WHO ON BRITBOX – Underworld 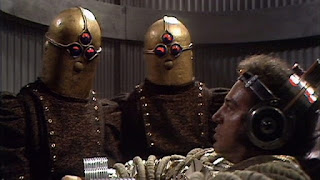 On 26th December 2019, 627 pieces of Classic Doctor Who content were made available to Britbox subscribers. Every Sunday in 2020, our Doctor Who expert, Tony Cross, looks back at some of the classic stories. Here is the Fourth Doctor adventure Underworld ...

Ah, Underworld. A story with a dodgy reputation based mainly (from what my aged and addled mind can remember) on the over-use of CSO making it look rather cheap and nasty. In truth it isn't as bad as its reputation suggests.

The story is pretty much Doctor Who's take on Jason and the Argonauts with a team of Minyans led by Jackson (James Maxwell) on a quest to recover their lost race banks from a lost ship, the P7E. The Minyans it turns out were given a technological leg up by the Time Lords long, long ago but it all went horribly wrong. The Time Lords were driven out and the Minyans destroyed their own world. It was the fate of Minyos that led the Time Lords to introduce their policy of non-intervention.

Episode One is pretty good. The Doctor's arrival is greeted with some concern by Jackson and lots of shouting by Herrick (Alan Lake). The other Minyans are Orfe (Jonathan Newth) and Tala (Imogen Bickford-Smith). They've been on their quest for one hundred thousand years apparently and look a pretty tired bunch. It turns out though that Minyans can regenerate...well actually it is more of a rejuvenation. There's none of the complete physical change that comes with Time Lord regeneration. They just seem to be younger versions of themselves.

There are some nice design touches too: the shield guns; the Minyan ship interiors & exteriors. There's also the rather lovely 'pacifier', which I wish we'd seen more of. The effect it has on Leela, in particular, is amusing.

The rest of the story isn't quite up to the standards of Episode One as the Doctor and Co find themselves wondering CSO caves; dealing with a rag-tag bunch of 'Trogs' whose wetness rivals the Xerons and coming up against various guards, Seers and finally the Oracle. It's not entirely clear what the Oracle is but it seems to be another in the long line of sentient computers - P7E's computer perhaps - having a metal breakdown. The Seers are robots.

Again praise must be given. This time for the costume design, which is pretty imaginative with the exception of the Trog's rags and the Minyan's silver spacesuits. The Seers, in particular, are a bit on the unusual side design-wise. It's a visually interesting story in many ways.


The CSO isn't quite as awful as I'd expected it to be. It doesn't quite work but it doesn't look horrifically awful often. One of the times it does look bad is when the Doctor, Leela, and Idas (Norman Tipton) are drifting down a zero-gravity tunnel. I'm afraid to say that whilst both Louise Jameson and Norman Tipton are doing their best to look like their feet aren't touching the ground Tom Baker kind of slouches his way down. It's very Tom but it doesn't help make things look convincing.

There's no great performances. Alan Lake's Herrick is a bit Brian Blessed for my liking, Norman Tipton's Idas is weedy and wet, a bit like Cordo in the Sunmakers but he never quite breaks out of the wet, James Maxwell and Jonathan Newth don't get a lot to do but heroism and Imogen Bickford-Smith gets to be pretty and heroic.

How much of this is down to the stress of making a story is a moot point.

We often forget, sitting here forty years plus later, that when this story was made UK inflation was c.15%. That meant that budgets set at the start of seasons were sucked dry by the spiralling costs that came with such high rates of inflation. It tended to affect the final stories of seasons in particular (where there was less room for manoeuvre). So when it became clear that the budget for Underworld couldn't stretch to cave sets then the production team was required to do some lateral thinking and then make extensive use of a technique we now take for granted in film making (CSO/Green Screen) to cover for the fact that the budget wasn't there. It doesn't quite work but you've got to admire the effort.

It's not the first Tom Baker story I'd reach for and I enjoyed it more than I did The Invisible Enemy (which is enjoyable in a different way) so it's probably reasonable to suggest that if you haven't seen it or you've been avoiding it due to its rather unfortunate reputation that you dig it out a take a look for yourself.