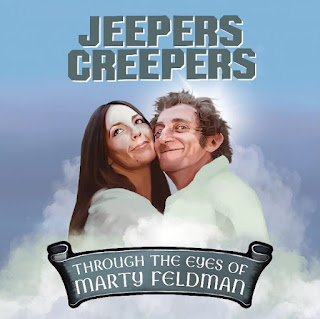 The audiogods at Spiteful Puppet have announced a special audio adaptation of the West End play Jeepers Creepers: Through the Eyes of Marty Feldman ...

Marty Feldman was an iconic, much-loved comedian and writer, who tragically died too young on the last shooting day of his final film; Graham Chapman’s Yellowbeard [read Barnaby's review and interview with that film's co-writer Bernard McKenna here - Ed]. The driving force behind the comic genius was his wife, Lauretta (allegedly one of the inspirations for Patsy in Absolutely Fabulous).

“After twenty years as a struggling variety turn and then a prolific scriptwriter and television star, comic genius Marty Feldman found screen stardom with his very first Hollywood role in Mel Brooks’ Young Frankenstein. With his wife Lauretta as the power behind the throne, his rise and fall and decline is related through bittersweet memories of the past and intoxicated infidelities in the present.
"Jeepers Creepers is a fantasy. A two-handed snapshot of a loving, complex, fascinating couple; seen through the unique prism of a cornerstone of comedy. The unique eyes of Marty Feldman.”

"I am very excited to be entrusted with the role of comedy legend Marty Feldman. Marty was a towering figure in the history of comedy and was hugely influential, without him we wouldn't have the charm of Round The Horne, the ground-breaking comedy of Monty Python or the joy of Mel Brooks. He was utterly unique and is justly celebrated in this wonderful script by Robert Ross, featuring a powerhouse performance from the multi-talented Jessica Martin who I greatly admire." (WinkTaylor, Marty Feldman)

“When Barnaby Eaton-Jones sent me a link to a clip of Lauretta Feldman, I knew straight away that this dark-eyed Sixties ‘dolly’ with the intelligent, smoky voice, was a character I could have a ball portraying. Robert Ross has written a two-hander that pays tribute to Mrs. Feldman’s enormous drive which enabled Marty Feldman’s genius talent to receive world-wide recognition in his short life. I’m really excited to be taking part in this and audiences are in for a treat with Wink Taylor’s uncanny invocation of the legendary Marty!” (Jessica Martin, Lauretta Feldman)

“Marty Feldman has been a favourite unsung comedy hero of mine many years before I finally had my biography of him published. The book became a West End play and yet I still felt there was more to be said. With glorious serendipity, along came Barnaby Eaton-Jones of Spiteful Puppet – with a desire to resurrect and reshape my love letter to the love match of Lauretta and Marty Feldman. The resulting audio production is as mad and magical as the man himself. Aye, aye!” (Robert Ross, author)

Originally directed by Terry Jones and produced by Martin Witts