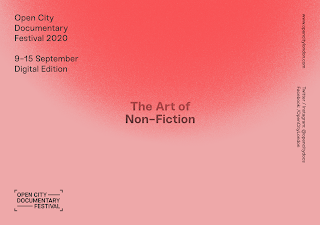 Open City Documentary Festival is excited to announce the full programme for its tenth edition, taking place online from 9th to 15th September, and tickets are available now...
Press Release
The festival’s first digital edition will also be the first that is available internationally, with affordable online screenings accessible in the UK, special events live-streaming worldwide, and an industry programme that is available free internationally.

New films are presented across 23 screening programmes, each of which is available to watch during the festival period for £3 via festivalscope. Films are split across two blocks, with 11 programmes available during the first (Weds 9th to Sat 12th), and 12 events in the second (Sat 12th to Tues 15th).


Nominated for the Emerging Filmmaker Award are:
Bird Island (Maya Kosa, Sergio da Costa, 2019),
Makongo (Elvis Sabin Ngaïbino, 2020),
The Choice (Gu Xue, 2020), and
The Lake and The Lake (Sindhu Thirumalaisamy, 2019).
The jury consists of: Dessane Lopez Cassell (curator, writer, editor), Jessica Sarah Rinland (filmmaker: Those That, at a Distance, Resemble Another, Black Pond), and Rehana Zaman (filmmaker: Your Ecstatic Self, Tell me the story Of all these things), and is chaired by Julian Ross (researcher, curator, writer). 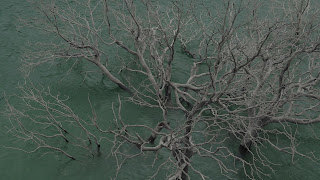 The wider film programme takes viewers on a journey around the world. There are unorthodox character studies like Ivan Ramljak’s Once Upon a Youth (2020), which travels across Croatia and back through time, telling the moving story of the filmmaker’s lost friend entirely through the friend’s own black-and-white photographs. Also exploring image production and consumption, Ra’anan Alexandrowicz’s widely acclaimed The Viewing Booth (2019) connects Israel and America through its incisive examination of how we think through what we see. With his A Radical Empathy (2018-19) series, Esery Mondesir creatively tells the stories of the international Hiatian diaspora; whereas Bruno Santamaría Razo’s coming-of-age documentary Things We Dare Not Do embeds itself within a small town in Mexico, observing the community surrounding a teenager coming to terms with their sexuality and gender identity.

Other films tie people and place together. David Osit’s festival favourite Mayor (2020) observes Ramallah’s mayor Musa Hadid as he attempts to deliver his ambitious vision for the city’s future; whilst Elvis Sabin Ngaïbino’s Makongo (2020) takes a similarly intimate look at two Aka Pygmies setting up a school for their community in the Central African Republic. A character-focused city symphony, Alain Kassanda’s Trouble Sleep (2020) is an energetic portrait of Nigeria’s third largest city, Ibadan. Meanwhile, Valentina Pedicini’s fascinating Faith (2019) locates viewers within the walls of a secretive Italian sect observing the rigid routines that members of this martial-arts practising doomsday cult are bound by. The winner of CPH:DOX’s main prize, Estephan Wagner and Marianne Hougen-Moraga’s Songs of Repression (2020) also observes a closed religious community, unearthing the horrors that occurred within a Germany colony in the Chilean Andes led by preacher and Pinochet supporter Paul Schäfer.

Other films link sites and their histories in a similar way. Simón Uribe’s Suspensión (2019) is a rigorous study of an unfinished bridge intended to connect the rainforests of Southern Colombia, whilst Maddi Barber’s gripping Land Underwater (2019) examines a dam in the Navarre Pyrenees which was flooded, submerging a number of local villages and land reserves. With The American Sector (2020), Courtney Stephens and Pacho Velez take a timely trip across the USA, tracking down all of the panels of the Berlin Wall that have since been transplanted to America. Matilda Mester and Tatjana Kononenko’s The Building (2019) is situated within a single iconic structure, charting the century-long history of Ukraine’s Derzhprom Palace; whilst artist-filmmaker Jessica Sarah Rinland’s acclaimed feature debut Those That, at a Distance, Resemble Another (2019) crosses the interiors of several institutions, following an elephant tusk on its journey between many of the world’s most famous museums. 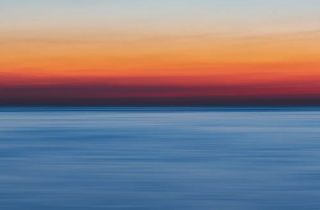 A varied special events programme includes 5 events that aim to expand definitions of non-fiction, each live-streamed worldwide on evenings during the festival. There are two unique audio-visual performance lectures. With Terra Femme: Women and the Travelogue Archives, filmmaker Courtney Stephens will present a selection of home travelogues shot by women during the 1920s-40s, exploring the historical context of these amateur films that occupy a space between home-movie and accidental ethnography. Commissioned for the festival, in The Congress of Idling Persons, artist and writer Bassem Saad will take a timely look at the centrality of life and death in liberatory struggles in Russia, Lebanon, and the USA, examining instances where groups or populations have practiced radical forms of healthcare.

You Cannot Close Your Eyes to New Horizons will be a live storytelling session in which four to-be-announced artists who engage with non-fiction in their work will share a story responding to the theme: ‘horizon’. In Seen and Heard, the curators of the ‘Black Lives Matter Video Essay Playlist’ Will DiGravio, Cydnii Wilde Harris, and Kevin B. Lee will screen selections from this resource that critically examine such issues as racial violence, police brutality and systemic inequality, discussing them with their makers. Veronika Kusumaryati and sound artist Ernst Karel will follow a live presentation of their augmented sound work Expedition Content with an expanded conversation with a panel of academics and practitioners covering sonic anthropology and new directions in ethnographic filmmaking.

Expanded Realities, the festival’s cross media (AR/VR/XR+) exhibition seeks new pathways for storytelling at the intersection of art and technology, and has this year been adapted for browser-based access. Multidisciplinary artist Ingvild Isaksen’s A Space Journey is an interactive scenography that encourages participants to move, and be moved, by their immediate surroundings. New from acclaimed new media artist Tamara Shogaolu is They Call Me Asylum Seeker, a web-based interactive experience that follows four LGBTQ people from the Egyptian Revolution in 2011 to the migrant and refugee “crisis” in Europe today. A new commission created by artist-researcher pair Merijn Royaards and Henrietta Williams, Iustitium/State of Exception charts a hyper-real visual and sonic journey through the heavily controlled landscape of lockdown London during the Covid-19 crisis of 2020. New festival format Voyages collects two interactive multimedia essays exploring stories of place, featuring special commissions from archivist and curator Andrea Zarza Canova and feminist researcher and curator Chandra Frank; whilst the Arcade collection, also new, contains a number of playable works made with open-source game-making tools that are available to explore direct in the browser.

This year’s Industry Programme is available free and internationally for the first time ever. Three events will be livestreamed daily, and the 2020 lineup includes masterclasses from filmmaker Maite Alberdi (The Mole Agent, The Grown-Ups, The Lifeguard); editor Anne Fabini (Of Fathers and Sons, Return to Homs, The Tale); film producer Joëlle Bertossa (I Am Not Your Negro, Advocate, Of Sheep and Men); and audio producer and Director of Research at Radiolab, Latif Nasser (The Other Latif, Connected). Artist Paisley Smith will present a session on world building for Virtual Reality. Other sessions will cover subjects including: Confronting the Colonial Gaze, Performance in Non-Fiction, and Reframing the News Cycle; and will feature panelists such as Ephraim Asili, Rubika Shah, Talal Derki, Basir Mahmood, Lea Glob, and Rana Eid, alongside selected filmmakers who have work included in the film programme.

Open City Documentary Festival takes place online between 9th – 15th September 2020. The full programme and tickets for all events are available at www.opencitylondon.com.
Email ThisBlogThis!Share to TwitterShare to Facebook