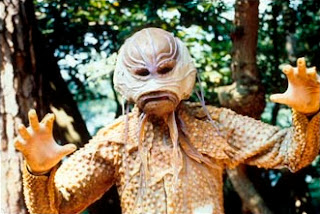 On 26th December 2019, 627 pieces of Classic Doctor Who content were made available to Britbox subscribers. Every Sunday in 2020, our Doctor Who expert, Tony Cross, looks back at some of the classic stories. Here is the Fourth Doctor adventure Full Circle ...

Find Tony's full Classic Doctor Who on Britbox list of reviews here.
Welcome to Azarius: land of mists and mellow fruitfulness. The home of Deciders that can't decide on a Starliner that is perpetually preparing to leave but never does, like Waiting For Godot with control panels and flashing lights.

It's a nice little story with no out and out villains. There are spiders, that bite. There are also Marshmen, that hit and Terradonian colonists that experiment on baby Marshmen, painfully. In fact the scene where Dexeter (Tony Calvin) is about to cut open the head of the poor little Marshman, which is intercut with the post-spider bit Romana screaming in agony is uncomfortable to watch.

This piece of experimentation gives Tom Baker an excellent chance to roll out his righteous indignation and anger at the three Deciders who he holds responsible. It's a good solid scene.

Full Circle is - as you all know - the first of the E-Space Trilogy. The TARDIS stumbles through a CVE (a Charged Vacuum Em...Em...something) and finds itself in a different universe instead of Gallifrey, which is where the Doctor and Romana were supposed to be going. The Time Lords want Romana back.

Instead, they find themselves on Alzarius whose natives seem to have a reasonably idyllic life swimming, fruit picking, and constantly repairing their damaged Starliner so that they can return to Terradon. Unfortunately, it turns out once every fifty years is Mist Time. This involves mist, clearly, and the emergence of nasty bitey spiders.

The bite also links you to the Marshmen mentally in some way and it makes you behave in a rather primitive fashion. Or at least that's what happened to Romana. The same marks seemed to show up on Tylos (Bernard Padden) and Varsh (Richard Willis) after the were killed by the Marshmen, for reasons that were a wee bit unclear but I think was to do with the genetic link between the spiders, the Marshmen and the Terradonians.

Tylos and Varsh are two of the Outlers who seem to be a gang of bored teenagers who've (understandably) fled the dullness of the Starliner for a cave. Varsh leads them. He's a cynical bugger with a distrust of what he's told by the Deciders. He has a brother. That brother is Adric (Matthew Waterhouse).

This is Adric's first story and it is hard to review it without being weighed down by the baggage and general fan hostility aimed at Adric/Matthew Waterhouse. He's one of the more unpopular Doctor Who companions but, to be honest, I never found him that annoying at the time. No one likes a smart arse though and having a teenage male smart arse - and a maths geek too - was probably not the best choice for a new companion. Waterhouse isn't too bad in this story but he's clearly not the world's greatest actor, especially when he has to combine movement and emotion at the same time such as when he has to try and save Varsh. I'll undoubtedly talk about Adric more as we go on.

The best performances though come from the three Deciders: Nefred (James Bree); Garif (Alan Rowe) and Login (George Baker). They do a fine job of combining authority with total ineptness and leadership with quite epic levels of procrastination. They also take what they are doing seriously, which is key to guest parts in Doctor Who. The minute an actor decides that it is only Doctor Who so why be serious is the moment it all falls apart.

Actually, Lalla Ward gets to do slightly more than usual to after the spider bite, which is nice to see, especially in the scene where she attacks the Doctor & he talks her down a little.

The realization that the Terradonians aren't in fact Terradonians at all but decendents of the super-speedy evolving Marshmen is fed gradually in. There's an awareness that there's a secret there somewhere that no one wants to talk about (or knows) & the clues are fed in until we know almost before the Doctor does, which makes a change.

The exterior scenes are also nicely done, interestingly lit & sun-bleached it does a good job of aliening up a home county pond and park.

So a nice little story that this feels like a Season Eighteen story: lots of science and seriousness, unlike Meglos. So we bid farewell to Alzarius and get ready for some hot Vampire action. Yep, it's State of Decay next.
Tony Cross is the creator of the wonderful Centurion Blog's found HERE and HERE.