CLASSIC DOCTOR WHO ON BRITBOX – State of Decay 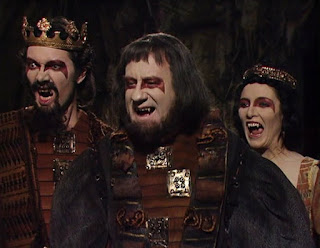 On 26th December 2019, 627 pieces of Classic Doctor Who content were made available to Britbox subscribers. Every Sunday in 2020, our Doctor Who expert, Tony Cross, looks back at some of the classic stories. Here is the Fourth Doctor adventure State of Decay ...

Find Tony's full Classic Doctor Who on Britbox list of reviews here.
The State of Decay or Doctor Who does Hammer except with a lot less cleavage.

The Doctor, Romana, and K9 are still stuck in E-Space but find themselves arriving on a strange planet where a big, spiky castle stands surrounded by a gaggle of little huts. But behind this peaceful-looking medieval scene hides a nasty secret...

Sorry...I couldn't resist. Adric is here though. He stowed away on board the TARDIS, something the Doctor and Romana won't find out until later.

I'm going to be fair to Matthew Waterhouse.

He's not to bad in this story, which doesn't exactly push the envelope in terms of what he's asked to do. His best work seems to come when he's still: for example the little two-hander between him and Romana after they've been captured is quite nicely played and paced, which implies a sympathetic Director to.

You do get the impression though that Lalla Ward is not his biggest fan.

The story as a whole, written by the great Terrance Dicks - who if honours meant anything would have been knighted by now for services to childhood literacy and fun - who clearly knows his Doctor Who onions. He's also a master at "borrowing" stuff from film and literature then morphing it into something that works in a Doctor Who context. So the Vampires are more school of Hammer than of Bram Stoker.

All the cliches are present:

But the clichés work even if sometimes, such as with the hairy, ragged peasants who dwell in the village, they almost border on the comedic. There is a lot of hair amongst the budding resistance too, stuck in a cave with technology and trying to work out when to act but not doing so. It takes the Doctor's arrival to push things along.

In fact you might argue that an over-arching theme of Season Eighteen is that eventually the procrastination has to end. The Doctor's often (as ever) the catalyst.

There are some nice scenes between Tom Baker and Lalla Ward, for example, the little chat in their cell about a Gallifreyan hermit, which feels like a facetious echo of the "daisiest daisy" moment in Day of the Daleks.

The Three Who Rule are magnificently made up, arch and more operatic than you'd expect on a BBC family programme. They move in a rather odd way as if they've developed a series of dance moves to pass the time. They're slow, sibilant and sinister. Aukon (Emrys James) in particular is excellent proving that it is possible to play something (un)dead serious without being "real". It's very theatrical but it works because of that.

As is often the case with Doctor Who the reveal of the main monster is a wee bit of a letdown. The Great Vampire consists of an enormous wavy hand emerging from a crack in the ground through a veil of cigarette smoke. The effect seems less that of a terrifying creature released from beneath the Earth than someone trying to attract our attention in a very smokey pub.

However, as it seems to be a badge of honour for some of my favourite Doctor Who stories to try and nobble themselves with one crap monster: chubby, cuddly giant rats in Talons of Weng-Chiang; the big inflatable snake in Kinda; the Magma Beast in The Caves of Androzani I'm looking at you in particular.

But that doesn't ruin a damn fine story, probably my favourite of Season Eighteen so far. A season that's turning out to have real consistency of quality with even Meglos being better than I expected.
Tony Cross is the creator of the wonderful Centurion Blog's found HERE and HERE.