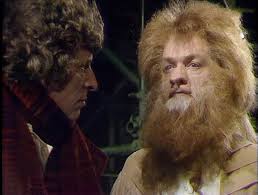 On 26th December 2019, 627 pieces of Classic Doctor Who content were made available to Britbox subscribers. Every Sunday in 2020, our Doctor Who expert, Tony Cross, looks back at some of the classic stories. Here is the Fourth Doctor adventure Warriors' Gate ...

Find Tony's full Classic Doctor Who on Britbox list of reviews here.
Warriors' Gate is directed by Paul Joyce, the nearest thing to an auteur Doctor Who has ever had. The fact that he worked with Christopher H Bidmead (the script editor) to knock Stephen Gallagher's original script into shape adds to that.

It draws on Cocteau's La Belle et la Bete, Rosencrantz and Guildenstern Are Dead, and Waiting For Godot to produce something with a real atmosphere.

Almost every shot seems to be carefully thought out. The lighting, the sets, the black and white landscapes, and the weird off-white void all contribute to this story feeling so different from most other Doctor Who. Oddly it reminds me of both The Web Planet and The Mind Robber. But there's not much else like this in the Doctor Who canon and that is down to Paul Joyce's vision.

In some respects it is a mirror image of Full Circle, the first of the E-Space Trilogy. In that story the Deciders don't decide anything. They procrastinate until finally, they have to act. In Warriors' Gate Rorvik (Clifford Rose) is desperate to act but can't and when he does destruction follows. His cry of 'I'm finally getting something done" is from the edge of madness while Biroc (David Weston) tells the Doctor to "Do nothing. It is done." Which alongside references to the I-Ching makes this very Zen and the Art of Time Travel.

The story is pretty brutal as well. Rorvik's crew are slave traders pimping time-sensitive Tharils across the Universe. They treat the Tharils with thoughtless violence but this we discover turns out to be a mirror of how the Tharils used to treat human beings when they had power. The Tharils once held a great Empire enslaving humans but eventually, the humans rose up, using Gundan robots to destroy the Tharils. The Empire gone the Tharils are now slaves to the humans. Instant Kharma is going to get you.

All of this comes out over the four episodes as the Doctor stumbles through a mirror into the past. This timey-wimey element of the story gives it a surprisingly modern feel. You could slot this into Moffat's Doctor Who with a few minor changes.

Joyce's concept creates the atmosphere and it really feels like he is trying to make something bigger than a Doctor Who story. But these foundations are built on by some excellent performances across the board: Kenneth Cope as Packard and Freddie Earle as Aldo should get a mention for excellence in a supporting role but almost all of Rorvik's crew, brutal thugs though they are to some degree, are interesting. They're not just 2D ciphers. They're grumpy. They whine, they moan and they skive off. It actually feels oddly like Red Dwarf sometimes.

Clifford Rose himself as Rorvik is superb. He's playing an SF version of Captain Mainwaring, a slightly useless leader with ideas above his abilities. It's a blackly comic role played dead straight. He's one of my favourite Doctor Who villains.

Tom Baker is up to his usual standards but feels coldly distant throughout as if he's contemplating his impending departure. Or the actual departure of Lalla Ward.

This is Romana's last story and Lalla Ward gets much more to do than usual. She drives much of the story whilst the Doctor is on the other side of the mirror. Despite that, her actual departure feels sudden and rushed. Like Leela's but without the silly love interest. It does feel 'right' though. Romana has changed traveling with the Doctor and she has no interest in returning to Gallifrey so when the opportunity arises to stay in E-Space and help Biroc free his people she grabs it with both hands. It's a shame really as I think the Doctor and Romana is a fine partnership

K9 also departs. JNT never liked the poor little bugger and Warriors' Gate gives him a chance to get rid of him once and for all. Damaged by the Time Winds, K9 gets left in E-Space with Romana where he can help her build a new TARDIS.

It's a story about nothing and about everything. It's about causes and consequences. It's about slavery and freedom. It looks wonderful and a real effort has been made to make it something special. It might not all work but I adore Warriors' Gate.
Tony Cross is the creator of the wonderful Centurion Blog's found HERE and HERE.