CLASSIC DOCTOR WHO ON BRITBOX – The Leisure Hive 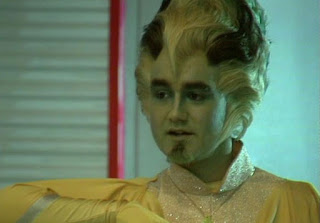 On 26th December 2019, 627 pieces of Classic Doctor Who content were made available to Britbox subscribers. Every Sunday in 2020, our Doctor Who expert, Tony Cross, looks back at some of the classic stories. Here is the Fourth Doctor adventure The Leisure Hive ...


Find Tony's full Classic Doctor Who on Britbox list of reviews here.
And wham...we're in the 1980s. In comes a new producer, John Nathan-Turner (henceforth and hereafter JNT) alongside a new script editor, Christopher H Bidmead. Together they take their new broom and give Doctor Who a good going over.

So, there is a new title sequence. There is a new version of the theme tune. There is a new feel to the series. Out goes the undergraduate silliness of the Graham Williams era and in comes serious sciencey stuff. Proper SF. Words like tachyonics get bandied about without due care and attention.

Tom Baker has a new costume and a new attitude. He looks thinner and older. There's an air of melancholy about him. It is as if the realization that his time as the Doctor is coming to an end has hit him hard and all these new, serious people are interfering with his vibe. The 'old Doctor' scenes, in particular, feel really heavy and elegiac.

Lalla Ward continues to give stalwart support as Romana II dressed in an Edwardian bathing outfit thing. I do like Romana II but apparently, the incoming JNT thought the TARDIS crew was too clever by half and plans are afoot. Hinted at by K9's rather unfortunate encounter with the English Channel. Things are changing.

The story itself is fine. The Leisure Hive itself is a fun facility on the planet Argolis. Argolis has been ravaged by a twenty-minute war against the Foamasi. The Argolins are all greens and yellows with seeds that pop off to mark their impending deaths. The Foamasi are insects. Big insects. Director Lovett Bickford does a fine job of allowing us to see them only a hint at a time because when finally revealed they look nice but just a bit too obviously costumes.

The Doctor and Romana get caught up in events as usual. Blamed for murder here, aged by a tachyonics cock-up there. There's sabotage, fraud and a rather unpleasant priggish young Argolin called Pangol (David Haig).

The Doctor and Romana are able to get to the bottom of things in a rather rushed final episode involving one of the most rubbish get outs from a difficult situation in Doctor Who history - the destruction of the Foamasi Ambassador's ship. Watch it. Talk about deus ex machina.

The spoilt and slightly mad Pangol gets regressed to a baby and his rejuvenated mother Mena (Adrienne Cory) vows to bring him up better this time around before dumping the little baby in the arms of the Doctor. Who then palms him off on Hardin (Nigel Lambert). Pangol is not going to be much better the second time around, is he?

It's got some nice moments. The main guest stars all do sterling serious work, David Haig in particular but the thing you'll notice most is how different this feels to Season 17 as JNT and co turn the 80s amp up to 11.