CLASSIC DOCTOR WHO ON BRITBOX – Meglos 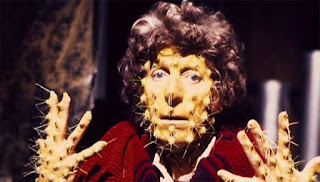 On 26th December 2019, 627 pieces of Classic Doctor Who content were made available to Britbox subscribers. Every Sunday in 2020, our Doctor Who expert, Tony Cross, looks back at some of the classic stories. Here is the Fourth Doctor adventure Meglos ...

After the new broom fest that was The Leisure Hive we move on to Meglos. In a way it feels like a step back. This story would slot quite nicely into Season Seventeen. Partly because it doesn't look quite as expensive as The Leisure Hive but mainly because it retains some of the silliness of that season. In fact Tom Baker actually looks like he's having fun for almost the only time in Season Eighteen.

What are General Grugger (Bill Fraser) and Lieutenant Brontadac (Frederick Treves) but the bastard cousins of the bandits from the Creature from the Pit. Yes, they're better acted but they aren't really the most convincing or threatening army the universe has ever seen. It's a couple of grumpy old men in stupid hats. However they're good value.

One problem with Meglos though is that the main villain is... well... a Cactus. In the first episode he's an inanimate Cactus, in the last episode he gets to fly across the floor in unconvincing style. Why anyone thought this was a good idea is beyond me but fortunately for most of the time Meglos is transformed into Tom Baker (sometimes with spikes, sometimes not) using so total embarrassment is avoided but like our prawn friend from the Invisible Enemy it does damage the credibility of the story a wee bit.

Tom's great as a villain though. He's got a certain coldness of manner when playing bad that makes him seem genuinely unpleasant and it gives him a bit more to do than usual so I suspect that might be one of the reasons why he seems to be enjoying himself a bit more.

The story basically revolves around a McGuffin called The Dodecahedron. This gives the people of Tigella the power to run their city but it isn't quite working properly, which is worrying. Repairing it isn't easy though for Tigella is divided. There's the Savants: blonde wigs, white jackets and black leggings whose faith is in science but they can't study the Dodecahedron because the Deon’s believe it is a gift from the God Ti.

This science v religion subplot runs through the story and allows the cast to deliver vast quantities of exposition through various debating scenes. The Savants are led by Deedrix (Crawford Langan) and Caris (Colette Gleeson) whilst the Deon’s - who sound like a 60s barbershop quartet - are led by Lexa (Jacqueline Hill). Jacqueline Hill is excellent as Lexa, her first return to Doctor Who since she stopped playing Barbara back in 1965. She has a real authority, which puts to shame the proper leader of Tigella, Zastor (Edward Underdown) whose performance is so flat it could be put up as part of the set.

It's annoying to because Underdown gets one of the great little speeches describing the Doctor - up there with 'he's fire and ice' - but it's delivered without any real oomph at all. It's a wasted opportunity.

It is fortunate at this time of challenge that the Doctor is nearby and having visited Tigella before gets in touch with Zastor. The Doctor, an ideal compromise between Deon and Savant for Zastor, is asked to help. Unfortunately Meglos intercepts the signal and using a body template provided by an unnamed, kidnapped Earthling (Christopher Owen), disguises himself as the Doctor. Meglos then - in an unspecified manner - traps the Doctor and Romana in a 'chronic hysteric loop'.

Now...calling something a chronic hysteric loop (a touch of the Bidmead's I feel) instead of simply a TIME LOOP is the sort of unnecessary pompousification that really gets on my nerves. Just call it a Time Loop. It's not scrabble scriptwriting. There's no bonus points for long words.

Anyway Meglos arrives with General Grugger & co, steals the Dodecahedron and does a runner back to Zulfa-Thuru. The Doctor avoids being sacrificed by Lexa & Co. Fortunately the Deon's chose a ridiculous silly way of sacrificing their victims involving large polystyrene rocks, ropes and candles. This gives everyone a chance to get to the Doctor, explain the Meglos doppelgänger and dash off to Zulfa-Thuru to stop Meglos by turning his own doppelgänger trick on him.

This might make Meglos sound terrible. Certainly when I watched it again more recently I thought it was rubbish but actually it's an entertaining enough romp if you don't take it too seriously. Apart from Underdown and one or two of the minor parts the performances are good. Lalla Ward gets a bit wasted as Romana in this story though as she's turned into a bog standard Doctor Who companion for most of it, which is a shame.

Not every story can be epic, portentous or brilliant. Sometimes just plain dumb fun is enough and that's Meglos in a nutshell.