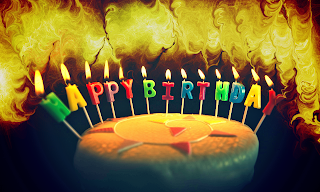 It is my birthday today. I am forty-five years old. A day off work would be lovely, but no; the good folk here at The DreamCage decided they wanted an article from me. Apparently, I have missed about seventeen deadlines this year thus far so, to be fair to them, it is not actually that much to ask. However, they want an article celebrating all the good things I have experienced this year and, apparently, wildly waving my arms around and then sobbing on Zoom is not going to put them off. But on a serious note for a moment… what part of 2020 is in any way celebratory?

I like many others have been touched by tragedy during the Covid-19 pandemic. I lost my best friend Paul in April, I have high risk children and an immunocompromised wife, and my children, all of whom were a great idea at the time, have been at home now for six months. The fact I haven’t completely lost the plot may be something to celebrate but, from a DreamCage point of view, I have watched relatively nothing new, I have read very little of anything that could be considered a new release, I found cinemas financially restrictive before the entire industry shut down and I am certainly not setting foot in one until some kind of vaccine is available, it just isn’t worth the risk to my family. So, what the hell can I write about? What have I actually been doing for six months? How on earth can I put something together when I have not really taken part in society in 2020 so far? I cannot. There is no point in even trying. All I have done for the year is love my children, take care of my wife, shopped for vulnerable family members, and slept when I could. Being someone who suffers from mental health issues I am quite proud of myself as everyone is alive and relatively in good spirits, but it takes a toll and exhaustion leads to apathy and when you cannot be bothered nothing gets reviewed.

What I have done though is spend time introducing my wife and kids to shows and films and books that I loved through various eras of my life. My children are a little older now and some of the stuff I have loved over the years is suitable for their age range, My wife and I have also spent half a year sat on the couch and so I have had a captive audience for whatever I wanted to put on. So here is a list of sorts, but it's all older stuff, it's all stuff I loved over the years and have enjoyed sharing with the family, or it's books that I’ve read as I’ve had lots of time to catch up on non-review reading. Enjoy.

Do not take the last slice of cake…

Doctor Who (mainly the rebooted Who from 2005)

All the Presidents Men

Fear & Loathing, Tideland, and Parnassus because I love Gilliam

Nearly everything written by Gareth L. Powell because Embers of War was incredible

We Are Anonymous by Parmy Olsen

From Bayou to Abyss and various other Sequart titles

The Villains books (Vicious and Vengeful) by V.E. Schwab