CLASSIC DOCTOR WHO ON BRITBOX – Castrovalva 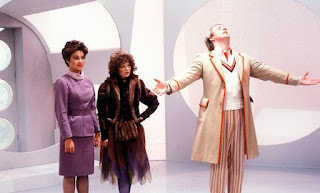 On 26th December 2019, 627 pieces of Classic Doctor Who content were made available to Britbox subscribers. Every Sunday in 2020, our Doctor Who expert, Tony Cross, looks back at some of the classic stories. Here is the Fifth Doctor adventure Castrovalva...

Find Tony's full Classic Doctor Who on Britbox list of reviews here.
Castrovalva is - of course - Peter Davison's first story. Like in Logopolis JNT and the Bidmead play with the regeneration. In Logopolis the Watcher adds a new thread, in Castrovalva the whole process of post-regeneration confusion is the excuse for what follows.

It also sows the seeds for an even more dramatic take on post-regeneration trauma in The Twin Dilemma, but once again I get ahead of myself.

The basic plot of Castrovalva is another one of The Master's fiendishly complicated attempts to kill the Doctor by first trying to push him and the TARDIS into a 'hydrogen in-rush' and then by using the kidnapped and suspended Adric to create a cunning trap into which the Doctor must fall. (Insert Ainley laugh here).

Castrovalva is a product of Adric's amazing mathematical skills. It's a fiction populated by people who think they're real. It's quite a Philip K Dick concept. The population of Castrovalva are real. Indeed, so convincing are they that it suggests that The Master has got quite a good sideline available as a fiction writer should he get bored with tiresomely complex attempts to take over the Universe.

You might argue that this is a story about free will. The Master's plan is revealed by the Doctor but it is Shardovan, the Librarian who gives his - fictional - life to stop the Master. Shardovan (played wonderfully by Derek Waring btw) has his suspicions. Perhaps being a fictional librarian contributes to those suspicions. It is his line: "You made us man of evil but we are free" that represents one of the most optimistic and courageous lines in Doctor Who history. Free will is not an illusion. Even the creations of the Master can make up their own minds.

The main supporting cast are all worthy of praise. Derek Waring I've already mentioned but Michael Sheard's Murgrave and Frank Wylie's Ruther are also both wonderful: sweet, innocent but finally stronger than the Master, even if Ruther does get 'disappeared'. The scene where Murgrave plots his pharmacy's location on a map of Castrovalva and realizes the confused state of the geography of the place and starts to understand what is happening is in particular quite lovely.

This is Ainley's second full stint as the Master and he's less OTT in this one. He does get to do a bit of non-Master acting by getting to flit about for a bit in disguise as [SPOILER - if you haven't seen this story before and can't spot him) The Portreeve. Why the Master does this is anyone's guess. The only vaguely plausible explanation is that he wants to gloat at the Doctor shortly before he dies.

Oh, the scene where the Master tries to break into the Doctor's Zero Cabinet is awful. The moment he picks up a poker to try and get into it is the moment the Master looks like the total muppet he actually is. Then he picks up the Zero Cabinet, gently taps it on the floor and it shatters. Well, less shatters more thuds.

The 'collapse' of Castrovalva is great and it is a shame 80s technology isn't quite up to the story's ambition, although I'd be interested to see how they'd do it now even with CGI - although the way Inception folds city blocks over on themselves indicates some possible solution.

Janet Fielding and Sarah Sutton get to move a lot of the story along and are the better for it, although it seems obvious to me that this TARDIS is too crowded. Also, there is a danger that Tegan's bloody-mindedness might get a bit irritating. I'm almost inclined to wonder how much improved Davison's Doctor would have been with just Nyssa but alas it was not to be.

Matthew Waterhouse spends most of this story suspended in some odd web-like structure arguing with the Master. I ideally toyed with the thought that it would have been quite amusing to see Adric and the Master team up properly as a 'bad' companion and Time Lord. It might have given an interesting spin to future series, especially as back in State of Decay Adric had been tempted by the prospect of Vampiric power.

But what of Peter Davison I hear you cry. It's his first story, surely you have something to say about him. Well, I do. It's a strong-ish start. I'm not as entirely convinced as others that his impressions of previous Doctors were a good idea but his Doctor's personality starts to emerge as the story goes on. I like its uncertainty, which is a nice change from Tom's absoluteness. It's early days yet though but it is a more than acceptable debut (although even Davison struggles with the rather melodramatic lines he's given at the end of Episode Three).

Two other little additions: the last moments of the Master as he's being held back by the Castrovalvans is very creepy. As the Master's in white - for a change - it almost looks like an angel being pulled down into hell in some renaissance painting. And the last is a mere quibble. That miraculous appearance of an electric wheelchair. It's bloody silly. That's all.
Tony Cross is the creator of the wonderful Centurion Blog's found HERE and HERE.