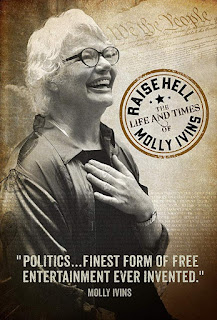 Raise Hell: The Life & Times of Molly Ivins follows the remarkable life of Pulitzer Prize-nominated journalist and best-selling author Molly Ivins. At the height of her popularity, 400 newspapers carried Molly’s column. Molly spoke from the heart. She was not a cynic. She gave a voice to people who didn’t have one, and she did it with wit: 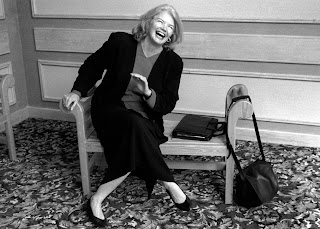 Molly’s greatest hits are many, but she also had a serious message. “It’s not a left-against-right issue, it’s a top-versus-bottom issue. It always has been. It’s about the haves and have-nots.” Molly realised than laughter was the great unifier. And the things she wrote, 15, 20, 30 years ago are happening right now. In some ways, she is more relevant now than when she was delivering her message.
Interviews with colleagues like Dan Rather, Rachel Maddow, Paul Krugman, Anne Lamott, Ben Barnes, Jim Hightower, Victor Navasky, Cecile Richards and many more shed light on the “unholy alliance” between modern politics and media, define responsible journalism and prove how relevant Molly’s Civics 101 is today.
A guardian of human rights with the American Civil Liberties Union; a syndicated columnist; a bestselling author; a troubled soul; and a brilliant wit who coined the withering nickname for former president George W Bush: Shrub. In Raise Hell, friends and family tell of Molly’s struggles and successes, those in power she shook, and even her dog named Shit. When she died of breast cancer in 2007, the nation lost a true champion and a woman who seemed to be afraid of nothing.
Raise Hell: The Life & Times of Molly Ivins opens in UK cinemas from 23 October 2020.