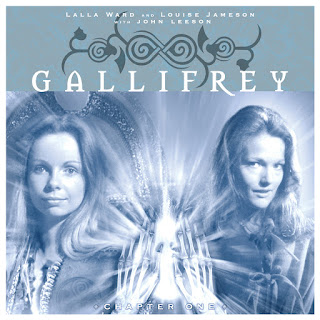 For one week only Big Finish are giving away a complete all-star cast Doctor Who freebie! Starring Lalla Ward, Louise Jameson, John Leeson and Lynda Bellingham it’s Doctor Who: Gallifrey - Weapon of Choice...

It's The West Wing – with Time Lords! Get the complete first episode of Gallifrey, the Doctor Who spin-off science fiction thriller series, free to download for one week only.

In recent months, Big Finish has released a selection of giveaways entitled Weekly Freebies. These are made available to download exclusively from the Big Finish web site’s Weekly Deals page at https://www.bigfinish.com/collections/v/weekly-deals for one week only.

This week’s Weekly Freebie is:

Writer Alan Barnes said: “Gallifrey revolves around impossible choices and that’s a consistent thing that runs through most of the stories – Romana is always being presented with terrible dilemmas that come with power. This is a chance to experience one of the most interesting, sparky and intelligent Doctor Who companions in a position where she has to make hard choices.”

The Time Lords of Gallifrey were the first to map the Web of Time. Now, under the reforming gaze of President Romanadvoratrelundar, the oldest civilisation is ready to shed its monopoly, sharing its secrets with a coalition of the Temporal Powers the Monan Host, the Nekkistani and the Warpsmiths of Phaidon among them.

But the coalition is a fragile one, and despised in some quarters. When a team of Time Technology Assessors makes a horrific discovery on the barren moon of Kikrit, it seems their enemies are arming themselves to strike at the alliance. Has a terrorist group really acquired a temporal weapon so terrible the Time Lords forgot about its existence?

In search of the truth, Romana sends the woman called Leela and the robot dog K9 to the enclave of Gryben, a reception centre for temporal refugees. But the truth is war's first casualty and the fallout could destroy them all.

For a limited time only, Big Finish listeners can also get 50% OFF all episodes in Gallifrey series 1-3 and 50% OFF the complete series 4 box set. All bundle prices are also 50% off.

All the above offers end at 23:59 (UK time) on 4th October 2020.
Images and info - Big Finish
Download your free Gallifrey episode HERE.