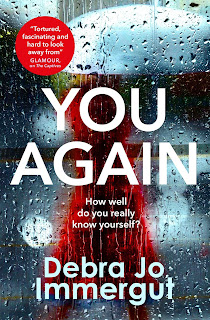 Steve Taylor-Bryant read You Again by Debra Jo Immergut, thanks to Titan Books...

I read The Captives by Debra Jo Immergut a while back [review here - Ed] and really didn’t enjoy it; I was in the minority on this and the book was successful and award winning, but what started out as a great concept left me feeling tired and bored. Therefore I didn’t approach You Again with much confidence, however it is another story where the concept was intriguing and so I was hoping for a better experience, which I got… kind of.

Abigail Willard first spots her from the back of a New York cab: the spitting image of Abby herself at age twenty-two—right down to the silver platforms and raspberry coat she wore as a young artist with a taste for wildness. But the real Abby is now forty-six and married, with a corporate job and two kids. As the girl vanishes into a rainy night, Abby is left shaken. Was this merely a hallucinatory side effect of working-mom stress? A message of sorts, sent to remind her of passions and dreams tossed aside? Or something more dangerous?

As weeks go by, Abby continues to spot her double around her old New York haunts—and soon, despite her better instincts, Abby finds herself tailing her look-alike. She is dogged by a nagging suspicion that there is a deeper mystery to figure out, one rooted far in her past. All the while, Abby’s life starts to slip from her control: her marriage hits major turbulence, her teenage son drifts into a radical movement that portends a dark coming era. When her elusive double presents her with a dangerous proposition, Abby must decide how much she values the life she’s built, and how deeply she knows herself.

The structure of You Again was very appealing, very interesting, and the jumps in time from young to middle aged Abigail played out in the pages of a journal were fascinating and thought provoking, especially for a man in his middle age who is also doing something for a living that isn’t the passionate thing I dreamed of being when I was just starting out. This build up of story was slow and, for some, will drag but I thought the pacing was an essential part of the world building. I also found Abigail to be a character I was really rooting for, the juxtaposition between her early freedom and her later family constraints was incredible and, towards the final act of the book when the science and investigation stuff appears, I got really excited... but then the book just seemed to end. I’m sure, if I read it back, it took a fair few pages to explain the science behind what they were dealing with but it felt like I got 200 pages of build up and 1 page of climax and what had been a very enjoyable read thus far left me feeling somewhat underwhelmed.

You Again certainly gripped me more than The Captives did, mainly because I actually cared about the characters in this book, but such a complex and interesting story build just sort of tailed off very quickly at the end which, whilst not devastating, was certainly disappointing.
Follow Steve on Twitter @STBwrites
Image - Titan Books
You Again by Debra Jo Immergut is out now from Titan Books
Email ThisBlogThis!Share to TwitterShare to Facebook