CLASSIC DOCTOR WHO ON BRITBOX – Earthshock 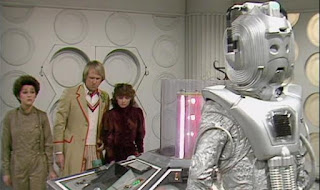 On 26th December 2019, 627 pieces of Classic Doctor Who content were made available to Britbox subscribers. Every Sunday in 2020, our Doctor Who expert, Tony Cross, looks back at some of the classic stories. Here is the Fifth Doctor adventure Earthshock ...

Find Tony's full Classic Doctor Who on Britbox list of reviews here.
I have said before that I have been interested to see which stories survive a repeated viewing unscathed. I found Tomb of the Cybermen a much less impressive story this time around so I wondered whether Earthshock's status as something of a Classic would stand up. This is a story I adored on its broadcast but as JNT infamously said: "The memory cheats".

But this is a delight. Sometimes despite itself. Let's take the often commented upon casting of Beryl Reid as the grumpy, no-nonsense space freighter Captain Briggs. It shouldn't work. It's such an off-beam casting choice but somehow it does and in doing so is one of the most adorable guest star performances in Doctor Who history. Interestingly Briggs's pilot-navigator-engineer is also a woman over the age of 30, Berger (June Bland). Both of them seem to take great delight in mocking the over-zealous jobsworth and Cyber spy Ringway (Alec Sabin) who is a bloke.

The sight of Beryl Reid firing a laser at advancing Cybermen makes me want to cheer.

This is the first appearance of the Cybermen in Doctor Who since Revenge of the Cybermen back in Tom Baker's first season and their sudden appearance Terry Nation stylee at the cliffhanger to Episode One is brilliant. JNT turned down a Radio Times cover in order to keep that a surprise for which we should be grateful.

Being the Cybermen they've been redesigned for their reappearance and look pretty good except - alas - for the Moon Boots. You've heard me whine about the feet of Doctor Who monsters often enough but this one is a bit annoying, especially as we see lots of Moon Booted Cybermen marching towards our screens at the end of Episode Three. However, the tone of this story makes the Cybermen seem genuinely nasty.

This is the first outing for David Banks as The Cyberleader. He would go on to play the Cyberleader - or his replacements - a number of times and took the role seriously enough to write a book about the Cybermen and to try and get their story to make some kind of sense. I used to love that commitment (and he was very nice when I queued up to get his autograph the *cough* four times I saw the Doctor Who Stage Play).

Banks' Cybermen do not have the sing-song electronic voices of old (or New Series) Cybermen and for a race that is supposed to have eliminated emotions they do a lot of emoting. Eventually, Banks' Cyberleader would be the monster with catchphrases: most notably a triumphant 'Excellent!' often accompanied by the slamming of fist into hand. In this, his first run out it doesn't matter too much and they make more interesting monsters when the Doctor can take them on in debate.

There's some nice support from James Warwick as Scott, the military officer (moustache a necessity) who gets to be suitably heroic. Clare Clifford as Kyle gets to run around a lot in an unfetching outfit before becoming one of the first of Eric Saward's 'nice person to kill off unnecessarily in the end for no particularly good reason'. I think Saward thinks this adds a touch of realistic cynicism to the proceedings and it might be fine if this story wasn't going to end with a far more important death. So Kyle's death is thrown away, drowned in the pathos of Adric's passing.

The moment has come. I come to bury Adric. I have been somewhat down on Matthew Waterhouse's acting skills since Peter Davison took over and even in this, his swansong, there are moments that lack conviction but I don't entirely think that's his fault. Waterhouse was going from child actor to grown-up that's a tough journey for anyone and asking him to play a major part in a popular BBC programme might have been too much to ask.

However we can't complain too much as he gets one of the best departures - if that's the right word for what happens to poor old Adric - of any companion. Doctor Who companions don't die. The Doctor always pulls something out of the hat to save them. This time he doesn't and Adric dies. He dies alone - the boy standing on the burning deck - on the bridge proving that when he said he was tired of being an outsider it wasn't hyperbole, he was an outsider.

The Doctor's desperate attempts to save him and horrified reaction when he realizes that he can't is well-played by Peter Davison. Davison is excellent throughout this story and his Doctor has grown on me a lot since Castrovalva. He's so understated.

So perhaps the memory doesn't always cheat after all.