CLASSIC DOCTOR WHO ON BRITBOX – Time-Flight 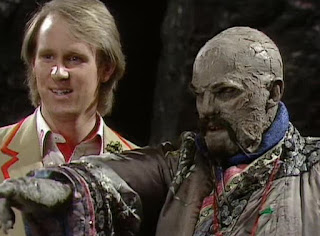 On 26th December 2019, 627 pieces of Classic Doctor Who content were made available to Britbox subscribers. Every Sunday in 2020, our Doctor Who expert, Tony Cross, looks back at some of the classic stories. Here is the Fifth Doctor adventure Time-Flight ...

Find Tony's full Classic Doctor Who on Britbox list of reviews here.
Ah...Time-Flight. This would be an average Big Finish story. Unfortunately, it is supposed to be a prime time BBC television programme and this is an attempt to do too much for too little money. Like The Web Planet but worse.

The minute someone walked through the door with a script involving time-traveling Concordes; Earth 145 million years ago and Plasmatons, the script editor should have escorted them politely out of the building. If the Script Editor didn't do it, the Producer should have. The ambition far, far runs ahead of what early Eighties Doctor Who budgets can achieve.

Take the Plasmatons. They don't feature much (thankfully) but when they do the 'bloke in a costumeness' is so obvious it destroys any genuine threat they might carry. They waddle. Badly. They are very ugly ducklings indeed.

Then there is the bizarre cuckoo-spit effect and the terrible - and some of it is embarrassingly shoddy - model work. The sheer ridiculousness of having access to the real Concorde and then producing two of the most modelly looking model Concordes is hard to bear. The difference between the 'realness' of the scenes shot at Heathrow and the in-studio primeval Earth's artificiality is glaring.

Now let us talk about the Master. I've already talked - often - about how dumb the Master seems to be on occasions. In this story, you have to ask yourself what the hell does he think he's doing. Why is he disguised as some bizarre Chinese magician? He's not planning this operation around the Doctor's appearance and none of the kidnapped Concorde passengers or crew have ever come across him before so why is he pretending to be Kalid? Is it for a bet or just for shits and giggles? Does he feel that a plan isn't a plan without getting drezzed for the occasion? It's just pointless complication above and beyond the call of fiendish duty. You almost want to grab the deluded renegade Time Lord around the throat and ask him a number of serious questions about his motivation, method, and means. Antony Ainley does a fine job in a pretty thankless role, although the whiff of ham is never far away, which is one of the reasons I generally prefer Delgado's take on The Master but there is something genuinely creepy about the Ainley Masters laugh, which is almost his catchphrase.

I'm not convinced by much of the acting in this either. With the exception of Nigel Stock's Professor Hayter and Richard Easton's Captain Stapley most of the guest performances are about as convincing as the sets.

The regulars all do pretty well. They don't let the story's limitations push them into hammery. I do think Sarah Sutton's Nyssa - who gets a bit more to do in this story - is the Fifth Doctor's best companion even if she has limitations of her own. However, I retain a teenage fondness for Janet Fielding as Tegan, who in a twist gets dumped at Heathrow at the end of this story. As she's been demanding the Doctor return her there for so long this shouldn't come as much of a surprise but it all seems pretty perfunctory. Not Dodo perfunctory, just generally perfunctory.

I like the idea of the Xeraphin though: a gestalt race at war with itself following the Master's arrival. It isn't entirely clear why the Master feels repairing his TARDIS by using the Xeraphin as a power source is a good idea but the events of the Doctor's Wife hints at the TARDIS being powered by some kind of intelligent multi-dimensional...thing. So perhaps he's just replacing one being with another. Who knows.

So we end Peter Davison's first season with this whimper. Davison has done a sterling job since taking over from Tom. I like his Doctor so far, even if the cricket gear is as silly in its own way as Colin Baker's coat of many colours. There's a kind of flustered nobility about him, which I like and a touch of doubt in his own abilities and solutions.

This isn't a great story. It is pretty rotten in parts. It is definitely the weakest of a reasonably good season but a polite smattering of applause for parts of it and a general realization that the failures are more about being under-resourced and over-ambitious than anything else.