Film - A Call to Spy 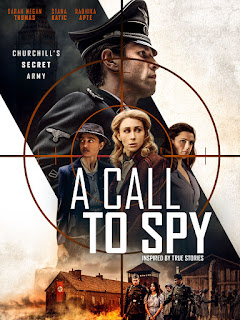 Inspired by incredible true stories, and coming to cinemas and Digital HD next month thanks to Signature Entertainment, watch the trailer for A Call to Spy...
Press Release
At the beginning of WWII, with Britain becoming desperate, Churchill orders his new spy agency, the Special Operations Executive (SOE), to recruit and train women as spies. Their daunting mission: conduct sabotage and build a resistance in Nazi occupied Europe.

With Virginia Hall alone the subject of three biographies in 2019, the film proves a vital, compelling story for our times, shining a light on the unsung bravery of these heroic women who helped turn the course of the war.

The award-winning account of the personal sacrifices of the courageous women who put their lives on the line to fight for freedom during World War II, A Call to Spy is directed by Emmy Award winner and Academy Award nominated filmmaker Lydia Dean Pilcher and is written by Sarah Megan Thomas  who stars alongside Stana Katic, Radhika Atpe and Linus Roache. A Call to Spy received its world premiere at the Edinburgh International Film Festival on the 75th anniversary of D-Day and has won awards from the Santa Barbara Film Festival, the Whistlers Film Festival and the Alliance of Women Film Journalists.