CLASSIC DOCTOR WHO ON BRITBOX – The King's Demons 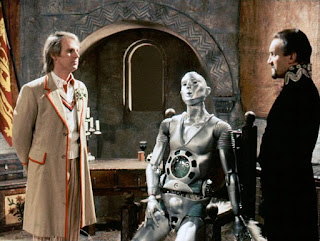 On 26th December 2019, 627 pieces of Classic Doctor Who content were made available to Britbox subscribers. Every Sunday in 2020, our Doctor Who expert, Tony Cross, looks back at some of the classic stories. Here is the Fifth Doctor adventure The King's Demons ...

Find Tony's full Classic Doctor Who on Britbox list of reviews here.
Like "Black Orchid" in the previous season this two-parter seems to be just a bit of inconsequential fluff.
The Master, armed with a tissue compression eliminator and a clever robot called Kamelion, is trying to change the course of human history by preventing the signing of the Magna Carta.

Even the Doctor admits this is small stuff for an increasingly messianic Master. It's the sort of minor temporal meddling that the Monk might be more likely to undertake. However, perhaps the Master was just looking for an excuse to practice his French accent and do a bit of jousting. He's not always the most sensible of villains, the Master.

On the other hand, it is possible that the Master was just using this as a test run for Kamelion before trying it out on more developed worlds.

Ainley does his best, as usual, erring towards la Fromage only on one or two occasions. Much as I do like Delgado's Master there is something watchable about Ainley. He's certainly fun.

The problem with this story - apart from the big historical question of what the Magna Carta signifies and whether its non-existence would make that much difference - is twofold.

Firstly it takes some rather excellent actors and then throws them away on tiny little parts (Frank Windsor as Ranulf and Isla Blair as Isabella), although Christopher Villiers as Hugh gives one of those performances that is filled with the kind of annoying over-exuberance that requires he be squashed like a bug, called in this household 'The Langford Effect'. Unfortunately, even the Master doesn't get around to doing that. The only actor given a decent part to run with is Gerald Flood as King John & he does a fine job.

Secondly, it just feels a bit tagged on to the season.

There's no real pace or power to the story, it kind of drifts by like the television iceberg. There's never any real feeling that the Doctor and crew are in real danger. Indeed both Tegan and Turlough spend most of the story so unafraid they have time to whine and moan. Tegan mainly about the cold and Turlough about the rough way he seems to be treated by everyone for no good reason. Turlough's complaints have a bit more legitimacy.

Everyone seems to be going through the motions a bit like a West End cast flogging their way through a flop. That doesn't mean every story in Doctor Who has to be deep, philosophical and pretentious but it does mean that a feeling of genuine threat has to be there. Of course we "know' the Doctor will find some way of getting out of it but it needs to feel like a struggle. This just feels like The Doctor and The Master enjoying a bit of light-hearted good guy-bad guy banter for old times sake so low are the stakes.

There's some odd stuff: the Master's disguise undoing itself by magic (which isn't explained or a huge surprise to the Doctor) and the rapid way everyone excepts the Master as a good guy once he has been revealed and follow his commands without question.

So despite much to criticize, I did find it mildly entertaining. I think that's just because it's such a throwaway little thing and because Ainley seems to be having a ball, which is always a joy to behold.
Tony Cross is the creator of the wonderful Centurion Blog's found HERE and HERE.