CLASSIC DOCTOR WHO ON BRITBOX – Enlightenment 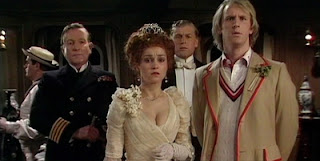 On 26th December 2019, 627 pieces of Classic Doctor Who content were made available to Britbox subscribers. Every Sunday in 2020, our Doctor Who expert, Tony Cross, looks back at some of the classic stories. Here is the Fifth Doctor adventure Enlightenment ...

Find Tony's full Classic Doctor Who on Britbox list of reviews here.
So the Black Guardian trilogy ends with a bang, not a whimper. There's so much to adore in this story, from its initial concept, which is perhaps best described as a mini version of The War Games: various ship's crews are 'borrowed' from different timezones in Earth's history to take part in a race. Instead of the War Lord though we have the Eternals a race 'beyond time'.
They seem empty. Bereft of ideas and emotions, shells of thought. It's a hard concept to grasp. After all, what do they do when they're not racing for 'Enlightenment'? They are clearly supposed to be something but what that something is pretty abstract. And how do they fit in with our bird hatted friends, the White and Black Guardians? After all the prize seems to be in their keeping somehow? Do the Guardians nip into Eternalsville and put out a 'who wants to be a Captain' request? The Guardian's can't have been entirely peripheral because Wrack (Lynda Baron) is clearly already a signed-up member of the Black Guardian's gang. There are some questions to be answered there and frankly, I can't be arsed to answer them. Not now. Probably not ever if truth be told.

As the conclusion to the Black Guardian trilogy, it is also the end of the 'evil' Turlough story arc. Mark Strickson is excellent in this: confused, chicken-hearted, freaked out and finally decided. When he is offered Enlightenment he makes the right choice. Whether the Doctor is right to believe him when he says he never wanted the deal with the Black Guardian is moot. He certainly wanted it initially, but perhaps the price he was asked to pay become too high too quickly. Anyway, after this Turlough's definitely one of the good guys but you're never quite sure if he can be entirely trusted.

The thing is though that Turlough's story isn't really the central one or at least it isn't particularly the most interesting. It is the relationship - if that's the right word - between Tegan and the Eternal Marriner (Christopher Brown) that holds the most fascination. Marriner is fascinated by Tegan, but it isn't physical. It's emotional. Tegan's mind fascinates him. She's full of interesting thoughts & emotions. She is alive. With big, glowing capital letters and Marriner is drawn to that life like - cliche alert - a moth to a flame. Tegan finds it rather creepy, although at the end as Marriner is returned to his unalive living you do get the impression that she's a little sorry for him. Christopher Brown is excellent as Marriner and the scene between him and Janet Fielding is wonderful.

It's interesting to note that the Edwardian Eternals, Marriner, and Striker (Keith Barron) are both quite buttoned-down and unemotional at the beginning and whilst Striker remains pretty much like that all the way through (and I should pay a minor tribute to Keith Barron for a surprisingly good performance) Marriner starts to fray a little at the edges. Meanwhile on the Wrack's ship, a Pirate Ship in full Oo-Ar cliche mode, the Eternals there seem to be acting - very loosely in the case of the terrible Leee Johns - as if they've stepped out of a Hollywood Pirate blockbuster. Lynda Baron is delightfully OTT. If she had a mustache she'd be twirling it. It's like two two-parters have been stuck together. One all serious and Bidmeadesque and the other some kind of camp Pirate tribute. All that's missing is a Parrot.

So it makes for a slightly odd, if vastly entertaining story, which I have fond memories of as a twelve-ish-year-old. Tegan's party dress in particular remains a fond memory for me. (Cough)

Enjoyable, entertaining and well worth a watch even if Peter Davison gets a little sidelined. It's almost, but not quite, a Doctor light episode. Davison is good though but, for once, the bulk of the action and acting is left in the hands of the companions.
Tony Cross is the creator of the wonderful Centurion Blog's found HERE and HERE.