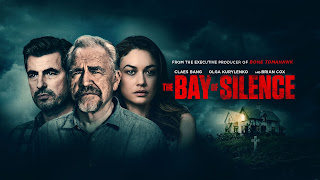 With the film out on DVD and Digital HD release next week thanks to Signature Entertainment, Ren Zelen has some words to say about Bay of Silence...

The Bay of Silence, adapted from the novel of the same name by Lisa St. Aubin de Terán, sees design firm executive Will (Claes Bang) and photographic artist Rosalind (Olga Kurylenko), enjoying an idyllic romance in Italy, where after some outdoor nookie and fun and games in the water, Will proposes marriage.

Fast-forward eight months, and we’re now in London, where Will is moving a pregnant Rosalind, her 8-year-old twin daughters (from a previous relationship) and their nanny Candy (Shalisha James-Davis) into a huge family home (his business is doing well, we assume). It seems that Will, Rosalind and her little girls are all set to welcome a baby and become a happy and prosperous new family.

However, the house has a dodgy balcony railing and while taking a photo of Will and her girls on the lawn below, Rosalind suffers a fall. Baby boy Amadeo is born prematurely and although he is healthy upon delivery, Rosalind begins to act strangely. She’s convinced that she actually gave birth to another set of twins and demands of Will, “Why did you let them take my baby?”

Will assures her that there was only Amadeo. One might imagine that, based on her obstetrician’s visits, there being a single baby during her scans was something Rosalind might recall, but as it turns out, Rosalind’s memory is only one of her many unreliable traits.

Fast-forward again to several months later and a celebratory gathering for baby Amadeo on the lawn of the new house where we are introduced to Rosalind’s mother Vivian (Alice Krige) and her manager and doting former stepfather Milton (Brian Cox) plus an Eastern European housekeeper and a flirtatious friend of Candy’s.

Ros again begins producing her photographic artwork but her erratic behaviour becomes more frequent. Soon she is scratching paint off the walls in the dead of night, apparently looking for the missing twin. Will again reassures her that there was only one baby and concludes that she’s just sleepwalking. But then, when he returns from an innocent overnight business trip, Will finds his home empty - Ros, the children and their nanny Candy, are all gone.

At a loss as to why Rosalind has fled and why she has scrawled ‘Liar’ in huge letters on one of her artworks, Will looks to his in-laws for answers. Although they seem worried and edgy, they offer no information.

The only clue Will has to Rosalind’s disappearance is a mysterious suitcase which had been delivered to her from Normandy on the day that he left, possibly from a house called ‘Bel Reve’ where Rosalind spent time in her teens. 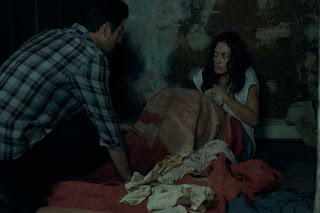 Finding the suitcase is still in the house, Will breaks into it. Behind a secret panel he discovers some old negatives. When he develops them in Ros’s darkroom they turn out to be lost photographs supposedly taken by a famous photographer named J.B. Raven.

Raven took a celebrated picture of Rosalind when she was 14, however, Will also finds some of the negatives are secret pictures of Rosalind, but in these she seems frightened and disturbed. Will recalls that the famous picture of Ros by Raven hangs on Milton’s wall. This is unsurprising, as Milton is an art collector whose items include numerous pictures and art works, as well as an extensively stocked gun cabinet.

After finding out about the background of the photographer who supposedly took the pictures, Will tracks Rosalind back to France where things really begin to unravel. Near a beach by a derelict house he finds the twin girls running wild and playing by what seems to be a trash-filled baby’s pram.

When Will looks under the seaweed ‘medicines’ the little girls have piled into the pram, he makes a horrific discovery. The girls tell Will that Candy the nanny is missing and that Ros has locked herself inside attic of the derelict house. When he breaks through the door he finds his wife gibbering and in too unhinged a mental state to explain anything.

Oddly, instead of calling the police or a hospital, Will distressingly decides to bury or burn all evidence of what might be a crime, and get his near catatonic wife and her twins out of the house and back to England by himself.

Will agonizes over his lack of answers to the baffling and tragic events which have occurred, (but to any observer it would seem that, had he taken a more rational and conventional route regarding his actions, he’d have got at least some answers to these questions).

Meanwhile, Rosalind’s mental disarray renders her amnesiac - she has no memory of how she got to France or anything that happened there. Will initially colludes with her mother and Milton who have concocted a story involving a car accident which Ros is all too happy to accept, but the strain begins to be too much for Will - he determines to find the missing nanny Candy and learn the sequence of events.

As the mystery of Rosalind’s past deepens, we get a narrative which includes mental breakdown, sordid photographs, wrongfully imprisoned French teens, childhood rape, lurking hooded men and what ultimately seems to be an unnecessary death. Rosalind has some major issues that she chooses not to disclose to her husband and which Will never bothers to ask about. There are indeed too many unexplored secrets.

Caroline Goodall’s film adaptation of the book often leaves loose ends dangling and questions unanswered – we never get any enlightenment as to the origin of Rosalind’s twin girls, nor her passing obsession with a missing baby nor what her message of ‘Liar’ was referring to or even what purpose some major events serve in the plot. Not having read the novel I’m not sure how the storyline is handled there, but in this adaptation, it would seem that almost the entire tragedy could have been prevented with just a little more communication.

Perhaps award-winning Dutch director Paula van der Oest was going for some kind of Gothic ambience or Hitchcockian mood? Certainly, the European locations are spectacular and lush, and the engaging performances from the excellent cast mostly manage to maintain our interest, despite the aberrant plot.

While The Bay of Silence comes across as a reasonably glossy thriller, some odd editing choices and gaps leave us at a loss as to some of the events and motivations. One can’t help wishing that The Bay of Silence hadn’t kept quite so silent – that it had explained a little more. The film shows potential for intrigue, but it leaves too many threads dangling around a hole where something integral was needed to patch it all together.