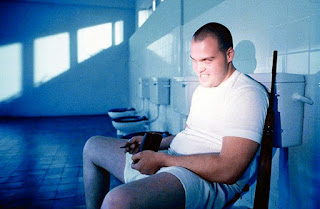 Steve Taylor-Bryant takes on a war film full of great characters, Full Metal Jacket, as it gets its 4K Blu-Ray release...

"The deadliest weapon in the world is a Marine and his rifle. It is your killer instinct which must be harnessed if you expect to survive in combat. Your rifle is only a tool. It is a hard heart that kills. If your killer instincts are not clean and strong you will hesitate at the moment of truth. You will not kill. You will become dead marines and then you will be in a world of shit because marines are not allowed to die without permission. Do you maggots understand?"

War films are, by and large, all fantastic.

Maybe you're watching for the blood ‘n’ guts action, special effects as everything in sight gets blown up or the linear story, following one or a group of soldiers through their lives before/during/after the depicted events. On the other hand, perhaps you are watching from a historical point of view for truths or inaccuracies. Either way a war film is a beautiful thing to watch from the safety of your own home.

Full Metal Jacket is not one of these films.

From the outset there is no linear story to be found. You don't know how this group of hairy headed young men came to be joining the U.S. Marine Corps, you just see the barber’s chair and then the moment when they move in barracks and meet Gunnery Sargent Hartman (the absolutely superb R. Lee Ermey, himself a Marine in Vietnam) for the first time. It is only the narration throughout the film from Private J.T. ’Joker’ Davis (Matthew Modine – Memphis Belle) that gives any kind of continuity, even when the cameras follow Joker to Vietnam and the story is more about the characters he meets and the different views on conflict than it is about Joker himself.

The bullying and abuse that occurs for first forty five minutes or so is uncomfortable. It is not what you expect from a film that is supposed to be emblazoning a hero to your screen and that's the point. I come from a military family and my father served in two modern conflicts, whilst I have friends still recovering from Afghanistan and, whilst these brave men and women are, in my eyes at least, the very identity of the term heroic, there is no way their lives panned out in CGI action filled worship.

The mental depreciation of Private Leonard ‘Gomer Pyle’ Lawrence (Vincent D’Onofrio – Law & Order: Criminal Intent) wellbeing was slated on the film’s release and yet is more accurate of gearing up for battle than a shouty man covered in paint screaming at an invisible enemy. The other point shown by Full Metal Jacket that was rare at the time was that Vietnam was an unwanted war, with no public support, and the so called heroes lost and list with devastating consequences.

As the film moves away from Parris Island into the war zone itself there is no gloss, no huge positively lit set on location. There is a studio in England and an old power station riddled with bullet holes. Kubrick didn't set the background to glorify war, he made it as despicable looking as possible to not take anything away from the next story, that of a media having to "spin" the events to appease a blood thirsty administration and an angry population. This wasn't a one man and his rifle wins the day take on war, this was a blunt, in your face, look at hypocritical leaders lying to everyone and what the difference is between what the media showed you and the harsh reality of fact.

From the psychological to the political, I am yet to see a war related film that is so brutally honest about consequence of power and whilst Platoon was glossy and beautifully shot, and Born on the Fourth of July looked in depth at consequence after the event, no film can touch Full Metal Jacket for honesty.