CLASSIC DOCTOR WHO ON BRITBOX – The Caves of Androzani 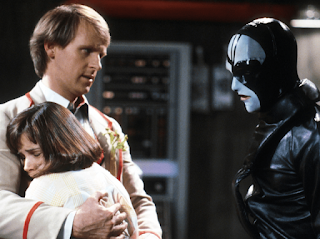 On 26th December 2019, 627 pieces of Classic Doctor Who content were made available to Britbox subscribers. Every Sunday in 2020, our Doctor Who expert, Tony Cross, looks back at some of the classic stories. Today is the Fifth Doctor adventure The Caves of Androzani...

Damn this is a fantastic story. You can even forgive it the lumbering, stumbling Magma Beast and its contribution to the only dud episode ending out of the four. It is the best send off the Fifth Doctor could have had and perhaps the best story of his entire era.

The direction by Graeme Harper is fantastic. The story moves with a drive rarely seen in Classic Who. It is no wonder Harper got the call to direct New Doctor Who. After all, this story could quite easily be a New Who story, particularly a David Tennant one except that in the end, the Doctor sacrifices his life not to save the Earth, the Galaxy or the Universe but to save a single person: Peri. It is summed up in that fantastic scene that turns into the cliff-hanger to Part Three.

But this story is filled with great stuff and great performances. Maurice Roëves as Stotz, the Mercenary. A surprisingly gritty character that might be more at home in a series like Blakes Seven; John Normington as Trau Morgus the unacceptable face of capitalism playing both sides for maximum profit; Martin Cochrane as Chellak, who does a fine job channelling the military mind & gets one of the most unpleasant (off-screen) deaths in the programme's history; Robert Glenister as Salateen (and his android copy); Roy Holder as Krelper, the most whingy of mercenaries & constantly complaining whilst constantly being bullied by Stotz; Barbara Kinghorn as Timmin, who appears just to be Morgus's PA but ends up stitching him up magnificently as things spiral out of control towards the stories end.

Topping the guest stars off though is Christopher Gable as Sharaz Jek. Initially, Sharaz Jek looks like the first in what will be a long line of villains with a taste for Peri's looks and a bit of a Phantom of the Opera wannabe but there's depth to Sharaz Jek and self-awareness often missing from Doctor Who 'villains'. He is mad, he says so himself. His physical condition and his burning desire for revenge against Morgus have driven made him mad but he remembers being something else, something better. That is what Peri reminds him of. So, it is not lusting that makes him want to keep Peri his prisoner, it is a desire to be himself again. To enjoy life and beauty and love. There might be an element of snobbery there too. His disgust at having to deal with the 'dregs' of society is the whinging of an upper-class chap down on his luck. Nonetheless, Sharaz Jek is a sympathetic character & his reaction when Peri sees his face for the first time without the mask and she screams is heart-breaking.

Sharaz Jek is not meant to be the real villain of the story anyway. That's Morgus, the capitalist willing to blow up an entire mine to solve an over-supply problem. A man whose only motive is the profit motive. Coldly shutting factories, killing politicians and generally behaving like a cold-hearted monster. Morgus betrayed Sharaz Jek and everything in this story is the result of that decision. Then the Doctor and Peri walk into the middle of things.

Nicola Bryant does a sterling job in this story giving Davison real support as things begin to end. It is a shame we never got to see more of them as a team - at least on television - as I think they work well together. She has got gumption has Peri.

But what of Peter Davison himself? Well, I have enjoyed his performance as The Doctor. I think sometimes Davison suffers from being between Bakers both of whom are much louder and more theatrical than Davison. Davison is like the player in a football team who does the simple, boring stuff well but gets ignored because some of his teammates do the great stuff well some of the time. He is a very human Doctor and in a lot of ways the template for David Tennant's Doctor in my opinion. Davison is Tennant is slow-motion or - to get it the right way round - Tennant is Davison on fast-forward.

The Davison era also suffered from the BBC's growing lack of affection for Doctor Who & JNT's desire to please the hardcore fans of the series more than the general viewing public. Too often great ideas were let down by lack of time and money. There is some great Doctor Who during the Davison era: Castrovalva, Kinda, The Visitation, Earthshock, Snakedance, and Caves itself. There is some terrible stuff too Time-Flight; Arc of Infinity; The Kings' Demons; Warriors of the Deep and Resurrection of the Daleks. But through it all, I think Davison does an unappreciated excellent job. At least, in this story, he gets the farewell he deserves and probably the best regeneration story in the series history as well as a memorable and moving regeneration sequence.