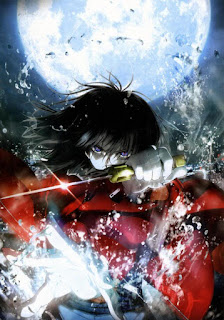 We love Halloween here at The DreamCage and we love the countdown to it even more as, every day in October, David Ames opens a window (well, writes an article) in his Hallow-vent Calendar of Asian horror films. His choice for Day 18 of Hallow-vent is The Garden of Sinners: Overlooking View ... 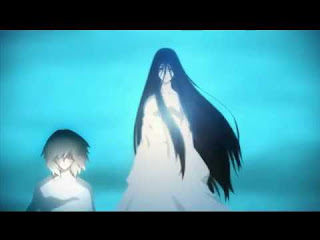 When researching good animated horror, I came across quite a few films from Asia that I have already greatly enjoyed. Films like Blood: The Last Vampire, Vampire Hunter D: Bloodlust, and Memories come to mind here, but then I saw an entry that I had never heard of before, and on inspection, I learned that it’s actually a series of hour long episodes. When I finally found a place to watch the series, I was excited, as it is hard to find decent Anime streaming in the states unless you want to pay quite a bit. I sat down to watch the first instalment, and I was pretty impressed. Today, we look at the first episode (film?) of this series, 2007’s Garden of Sinners: Overlooking View.

Set in 1998, Overlooking View introduces us to Shiki Ryogi, a closed off detective who works for an agency specializing in paranormal cases. When a series of strange suicides by a number of local high school girls strikes the city, Shiki and her team, made up of detectives Mikiyaki and Toko as well, begin to look into the occurrences.

Shiki goes to the strange apartment complex at the center of the suicides to discover the secret, and after seeing first hand another suicide, witnesses five spirits floating above the building. When she investigates, she comes face-to-face with the demonic entity that is inhabiting the girls and causing their deaths. She must then use all the powers at her disposal to deal with this menace before more deaths can occur.

This film is so much fun to watch. The voice acting is perfect, not over the top like some better known series, and the art…oh the art; it is spellbinding. The show blends 2D and 3D animation seamlessly, and the colors and pencil work are spectacular. The look of the film overall made me instantly want to watch the rest of the series.

Overall, the story is convoluted and at times hard to follow, but honestly that doesn’t really seem to matter. What this film does so well is establish a mood that permeates every scene and perfectly sets the stage for the content. This show is so much about watching for the story as it is about experiencing this film as a piece of art.

This one is something that anyone who is a fan of good art and music should see, purely for the experience and the scenic representations that capture foreboding and tension perfectly. I can’t wait to watch the next in the series.