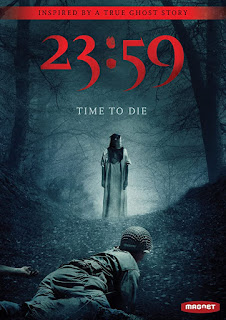 We love Halloween here at The DreamCage and we love the countdown to it even more as, every day in October, David Ames opens a window (well, writes an article) in his Hallow-vent Calendar of Asian horror films. His choice for Day 4 of Hallow-vent is 23:59 ... 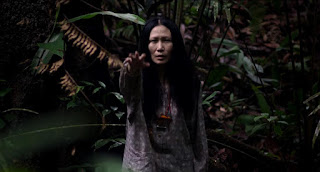 Sometimes you hear a concept for a film and you immediately become excited at the prospect. Today’s film was like that for me. I love war movies, and I love horror movies, and so, when I heard about an Asian horror movie surrounding a base camp during training, I thought “what could go wrong?” Unfortunately, it seems as though quite a bit could. Today we look at Gillbert Chan’s 2011 Singaporean-Malaysian army horror movie 23:59.

Set during the final months of a platoon’s National Service training, 23:59 follows Jeremy as he and his mates try to make it through the work and struggle of their positions. Jeremy is present, with his best friend Tan, who, unlike the other young men present, is weak of constitution, and is afraid of basically everything.

One night, while telling ghost stories, the other cadets reveal that on this particular jungle island, years before, a woman had died at exactly 23:59 and now returns to haunt the living at exactly this time. Tan, convinced that he has seen her already, and certain that he is next to die, melts down, and only at the behest of his best friend, Jeremy, can continue on with their training. Sadly, he does not make it through their final march, and soon, Jeremy must confront the realization that the rumors and stories are true, as more soldiers begin to die.

Overall, the first impression of this film is that they manage to accomplish a decent look with a very low budget. The filming looks decent and the practical effects, while not astounding, work well-enough for their intended purposes. Unfortunately, the look is one of the few highlights.

The acting, as a whole, is pretty rough. It feels like we are watching a film made for a university class, and less like a studio picture. Henley Hii does probably the best job as Jeremy, giving us a sense of his fear and his sadness, but overall, even his teary-eyed glances into the camera cannot save the movie. The only other bright spot is probably the weirdly-placed, out-of-left-field exorcism/possession scene, which Josh Lai does pull off remarkably well.

In the end, it felt as though they were trying for Full Metal Jacket meets The Conjuring in terms of concept, but instead ended up with a student film version of Dog Soldiers but with ghosts. I hate writing bad reviews, and this film had some okay spots, but for the shortest runtime in all of the calendar this year (78 mins.), it still felt like it took eight hours to get through.