CLASSIC DOCTOR WHO ON BRITBOX – The Five Doctors 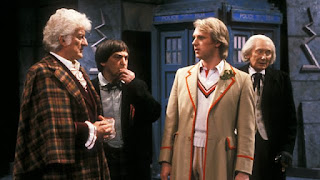 On 26th December 2019, 627 pieces of Classic Doctor Who content were made available to Britbox subscribers. Every Sunday in 2020, our Doctor Who expert, Tony Cross, looks back at some of the classic stories. Today is the Multi Doctor adventure The Five Doctors...

So, Season 20 comes to an end with a big, sparkly party. The Five Doctors together. At last.

Except it is not quite like that. Tom Baker does not really appear, except in bits of footage nabbed from the unscreened (and unreviewed by me - so far - Shada). Whilst William Hartnell's death means that the First Doctor is played instead by Richard Hurndall. Hurndall does not really look much like Hartnell but makes a fair stab at a version of the First Doctor that does the job. After all none of the Doctors - except Davison - are really doing much but a 'best of' performance. The cliches of each incarnation are given a runout. After all, this is a ninety-minute celebration, not an attempt to recreate each Doctor's era.

This was my first proper introduction to most of the older Doctors and unsurprisingly it is Patrick Troughton who I enjoy watching the most. He's so much fun to watch and he's interaction with both the Brigadier, who in post-retirement mode is picked up and dumped in the Death Zone alongside the Second Doctor, and his other-selves is delightful.

The plot is pretty mundane: a.n.other renegade Timelord has seized control of the 'Scoops of Rassilon' and has dragged the various incarnations of the Doctor to Gallifrey and placed them in the Death Zone to play the 'Game of Rassilon'. This is not a particularly cerebral form of Snakes and Ladders but a battle to survive. To add a bit of spice to the mix our nameless renegade sends a Dalek, The Master, a Raston Warrior Robot, a Yeti and a large number of David Bank's Cybermen there to. The purpose of the renegade's complex plan is to find out the secret to IMMORTALITY. He cannot do it himself; it is dangerous. So, he plans for the Doctor to do it for him. Why he decides to make the Doctor's mission more complicated by adding a load of things in there that will get him killed I do not know. Gallifreyans never seem to want to do things the straightforward way, do they?

All these monsters have very little function except as nostalgic threats to the Doctor. The lone Dalek is pretty summarily dispatched in a series of Skaro-esque corridors that seem to have been built in an extension to the Death Zone, the Cybermen do a lot of marching but are mainly there to be butchered either by the Raston Warrior Robot or The Master. The Yeti, which must be a real one, not a Great Intelligence infested robot, just does some roaring and clawing. (Classic Doctor Who has an uncanny knack of forgetting which of its monsters are robots and which are not. The Yeti are both, but the monstrous ones are robots. The Daleks are not just robots they have organic content. The Cybermen are not just robots...etc but I digress.)

Even poor old Antony Ainley is the second banana here to the other renegade. Ainley gets to do some nice work, including the nice scenes with the High Council of Gallifrey (which due to budget constraints seems to consist of three Time Lords sitting in a Garden Centre) but eventually ends up tied up after getting a punch in the chops from the Brigadier.

Oh but he does get involved in one of Doctor Who's more stupid setups. The chequered floor and pi. I am not going to delineate precisely why this scene is ridiculous because I could be here all day but fundamentally the actions of the characters do not fit with the explanation. Pi is a mathematical concept that I always hated as a schoolboy that has something to do with circles. It does not in any way explain what the hell takes place with The Master, the First Doctor, Tegan, and the Cybermen. It just doesn't make nonsense, let alone sense.

In the end, the renegade is unmasked, the Doctor gets to meet up with old companions - real and imaginary - and the bad guys are defeated - and I do like the fate that awaits those who search for immortality. Rassilon, of whom we hear much-awed talk, turns out to be a chubby moustached man who, in a Pertwee story, would get cast as the annoying civil servant. I prefer him as Timothy Dalton.

But in the end all these criticisms, the mocking of Paul Jericho's 'No! Not the Mind Probe' line, the cliches and all the rest of it do not amount to a hill of beans. This - like The Three Doctors - is not a story to be judged on quality. It is almost impossible to juggle this many characters and get a smooth plot from it. We're not watching The Five Doctors for that stuff.

We're watching it as a celebration, as a 'best of' and we want to hear the Third Doctor 'reverse the polarity of the neutron flow' and see the Doctors mocking each other. We want a bit of fun. And that more than anything else is what The Five Doctors is about, fun. That and a little nostalgia.