CLASSIC DOCTOR WHO ON BRITBOX – Warriors of the Deep 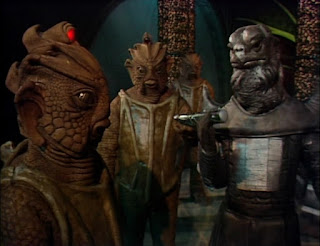 On 26th December 2019, 627 pieces of Classic Doctor Who content were made available to Britbox subscribers. Every Sunday in 2020, our Doctor Who expert, Tony Cross, looks back at some of the classic stories. Today is the Fifth Doctor adventure Warriors of the Deep...

Ah, Warriors of the Deep how nice to see you.

If there is ever a Doctor Who story that would confirm the prejudices of non-Doctor Who viewer towards Classic Doctor Who it is Warriors of the Deep. It is like The Comic Strip Presents: Doctor Who. You can use the pressure of the production as an excuse - and a fair one - but someone, somewhere should have just said: No, this is not good enough. Scrap it.

It's so easy to give it a kicking: it is too brightly and flatly lit; the sets wobble; the Sea Base doors are foam rubber and obviously foam rubber; the Sea Devils have a severe neck problem and waddle slowly along like drunken ducks; no one can shoot straight etc. That is before we mention the Myrka.

What is admirable is the way everyone in it takes it so seriously. There is no arch camping about; there is no treating it like a comedy or going way over the top because it is 'just' Doctor Who. Everyone is trying hard to pretend they are in a dark cold war thriller with aliens added so that Peter Davison's final line: "There should have been another way" is heart-breaking. There should. There's another strong scene in the final episode when the Doctor takes out his anger on Preston (Tara Ward) and he rages against the human race - similar to Matt Smith's 'nobody human has anything to say to me' scene in The Beast Below. It's strong stuff with the Doctor bought down to earth by Turlough's little aside 'it doesn't excuse what they are about to do'.

Most of the other actors are doing pretty well, although Tom Adams as Vorshak does feel like he's giving a performance that could slot happily into Airplane as he's so straight down the line master and commander. It borders on the pompous.

But in the end, you cannot get away from the fact that this is rubbish. It is not the script particularly, although that does feature some clunking lines: "Bring forth the cutting device" and "...the power bloc opposed to the one that runs this base" being two of my particular favourites. It is not the direction, although that is pretty plodding and features some rather bizarre angles. It is the shoddiness of the whole thing, which is vastly unfair on the people that made it who were put under a ridiculous amount of time pressure. The fault, if it is to be laid at anyone's foam rubber bulkhead, is JNT's.

I have one particular geek bugbear about this story - above and beyond the usual stuff - which is the Silurians flashing lights. This drives me insane and considering that Ian Levine was working with the production team by this point on 'continuity' issues it is a disgrace. The lights flash when a Silurian is speaking in time with his voice. Why? WHY? Even assuming that no one bothered to look up or remember the original Silurian story where the 'light' was effectively the focus of mental power and a weapon why did no one say..."These are living creatures. Why would they have a flashing word light? Do they all find it impossible to tell which one of them is talking? Do they only talk in the dark? WHY? WHY!!

It is a bloody shame because I like the Silurians. They are Doctor Who villains with a decent motivation and some shades of grey. They show us - humans - up for the kind of short-sighted, fear-filled ape descendants we really are.

I should mention the Myrka, even if it is only to hammer another nail into the large, probably green paint-stained coffin, of the poor thing. It can only be excused. It is slow, it waddles, and it is basically a pantomime horse with affectations. The fact that it is front and rear ends are played by the front and rear ends of the Rentaghost Pantomime horse just makes it worse. So, waddling through a brightly lit studio whilst various extras throw themselves at it does not help but we all know what the classic moment is do not we. Oh, come on you didn't think I could write a review without mentioning it.

What the hell possessed Pennant Roberts to allow Ingrid Pitt's Doctor Solow the ridiculous posturing with the Myrka as if they were going to go mano-a-mano. Pitt's karate kick is pretty impressive but so flipping stupid it should be illegal. And once having filmed it why the hell did no one else take Pennant aside and tell him to drop it. Then burn the negative.

This is the sort of story that deserves a drinking game all of its own. So, you can gather your like-minded friends together and get quietly drunk whilst mocking the whole thing and when Ingrid Pitt karate kicks the glorified pantomime horse you can cheer.