CLASSIC DOCTOR WHO ON BRITBOX – The Awakening 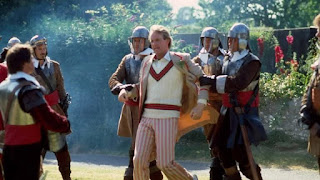 On 26th December 2019, 627 pieces of Classic Doctor Who content were made available to Britbox subscribers. Every Sunday in 2020, our Doctor Who expert, Tony Cross, looks back at some of the classic stories. Today is the Fifth Doctor adventure The Awakening...

That was pretty enjoyable stuff.

This is definitely the best of the three Peter Davison two-part stories. It rattles along at a fair old pace, is well cast and well-acted even if (again) it does not feel like there is too much on the line. There is a hint or two that the Malus is a threat to more than just Little Hodcombe, but it never really comes across.

It also has the air of an old school British horror movie. One of those 'rural horrors' that Mark Gatiss talks fondly of in his rather nice series of horror movies. Doctor Who does the Wicker Man perhaps. There is something intensely creepy about wrongness in an English rural setting. Perhaps it is the opposite of the prettiness and the oddness or the realization - which this story brings home rather nicely - that the veneer of 20th-century civilization is a lot thinner than we would like to think. It does not take much to nudge us back into less enlightened times.

And to think this all started off because Tegan wanted to visit her grandad Andrew Verney (Edward Hall). Only in Doctor Who would say grandad be kidnapped by a raving aristo like Sir George Hutchinson (the magnificent Eric Lil formerly of 'Image of the Fendahl') whose mind has been affected by an alien scout from the planet Hakol. So instead of a nice relaxing trip The Doctor, Tegan & Turlough must battle this big faced creature, it's psychic powers and a belligerent gang of yokels who seem to have followed Sir George down the padded road to Lalaland.

Actually one of my minor issues with this story is the bizarrely straightforward way the whole village seems to go along with Sir George. He is apparently cut the village off from the outside world and is going to burn Tegan at the Maypole. Would they have stood by and actually let this happen? Certainly, Colonel Ben Wolsey's reaction suggests that they might have tried to stop him. Wolsey (played in fine yeoman style by Glyn Houston, formerly of 'The Hand of Evil') seems to have realized that there is something a bit 'lost' about Sir George. On the other hand, the sadistic fun that Joseph Willow (Jack Galloway) gets from the proceedings seems to suggest that things might have been less straightforward than that.

It seems that everyone who dislikes Sir George's war games is rounded up & locked away: Andrew Verney, Jane Hampden (Polly James, also another excellent performance. She and Peter Davison seem to have nice chemistry and there is some nice 'business' with opening and closing the TARDIS doors towards the end which I enjoyed).

On which note we must pause for a moment. Is it me or is the Peter Davison era the moment the TARDIS loses a bit of its lustre? Instead of being an astonishing thing, capable of blowing people's minds it has become some kind of glorified taxi service. The Fifth Doctor is constantly inviting people in & taking them on short - or long - hops. But I digress.

The Malus itself, which looks like the angry brother of the Face of Boe (perhaps he's Rex from the latest Torchwood series), isn't as effective as it could be, although the miniature version has a certain creepiness to it a la ventriloquist dummy stylee. However, there are some nice scenes involving ghostly Cavaliers and Roundheads, the latter of whom butcher one of the villagers rather unpleasantly. A fact that everyone having a jolly time in the TARDIS at the end seems to forget. Let us hope the poor chap did not have a wife and family who might miss him (and here the Austin Power's scenes involving the death of henchmen springs to mind). I do wonder how they'll explain his death, Sir George's disappearance, and a massive exploding Church to the authorities, especially as everyone in the TARDIS seems more focused on having a nice cup of tea.

Oh, and last but not least I should complement Keith Jayne on an excellent performance as Will Chandler. Will's a young lad from 1643 who the Malus drags into the 20th-century and Jayne makes him live. It is quite a charming little performance, reminding me (perhaps oddly) of Fraser Hines as Jamie. You can see him as a companion and I like to think there is a series of adventures out there involving the Doctor, Tegan, Turlough, and Will.