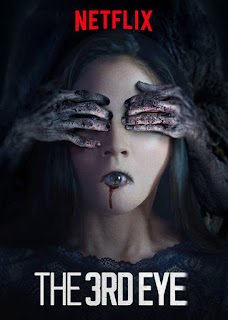 We love Halloween here at The DreamCage and we love the countdown to it even more as, every day in October, David Ames opens a window (well, writes an article) in his Hallow-vent Calendar of Asian horror films. His choice for Day 1 of Hallow-vent is The 3rd Eye ... 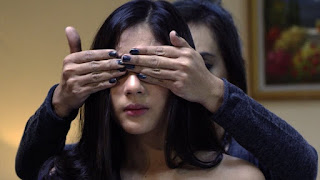 Have you ever sat down to watch a movie and it begins reasonably well? You enjoy yourself, things are going swimmingly, and then something comes out of left field to staunch the enjoyment, and all of a sudden, you are trapped between the choice to continue watching out of some strange need to finish things, and the desire to stop immediately. That is the perfect explanation for tonight’s film: Rocky Soraya’s 2017 Indonesian haunted house movie, The 3rd Eye.

This film follows two sisters, Alia and Abel, as they try to deal with their inborn ability to see the dead around them. As a young child, Abel was always able to see beyond the veil, to understand that spirits surrounded humanity, and that if pushed too far, could cause harm. While seemingly no one believed her, she suffered in silence. Years later, after both of their parents are killed in a car crash, Alia comes back home to care for her sister who, it appears, is still suffering from the same hallucinations as she was during childhood.

In order to be closer to Abel, to forge that bond, and honestly to convince her to go to a psychiatrist, Alia listens to Abel and goes to visit Abel’s Spiritual leader/priest (maybe?). Mrs. Windu explains to Alia that Abel’s third eye, the ability to see beyond, has been open since she was a child, and so Alia asks to have Mrs. Windu force her third eye open as well, in a show of solidarity with her sister.

Once this happens, Alia realizes that Abel was telling the truth all along, and that there were malicious forces surrounding humanity, and unfortunately causing a serious issue in the home the sisters are occupying. Davin, Alia’s boyfriend, is understanding, and must leave for work occasionally, so it becomes a mission for the sisters to help those around them pass on, and hopefully garner some peace from the restless spirits that haunt them.

This movie was supremely disappointing in the way I previously described. While the CGI choices were unnecessary and looked atrocious, the first half of the film was genuinely effective. The scares and subtle creepiness was achieved wonderfully, and the concepts, while maybe not fully flushed out, were still fun to watch and experience. The movie didn’t have that crazy polish you get from some horror films like The Witch or Hereditary but it looked good, and even had some great moments of cinematography, although most of the film looked like a Spanish soap opera (think Telemundo).

I was genuinely enjoying the film, and then BOOM, we veer off into blatant ripoffs of other, much more successful films. All of a sudden, we find out that Alia could always see dead people, and that the spirits just need help to fulfill their final purposes, the crux of this argument being that Davin had been *gasp* dead all along. If that sounds familiar, it should be: it is basically the plot for The Sixth Sense.

Along with that, was a strange, unexplained exorcism scene, that, while somewhat effective at times, felt more like they just decided The Exorcist was a great movie and to just borrow actual footage and dialogue from that classic instead of doing their own thing.

Lastly, Abel is *somehow* trapped in the other world, a graying, monochromatic world where the spirits go about their lives, and Alia must go into a trance to travel to this world, locate her sister’s spirit which is being held captive, and bring her home to save her. Once again, sound familiar? It’s just the climactic scene from Insidious.

So instead of really delivering on the haunted house genre, something they were leading to rather effectively, it felt like the writer ran out of ideas and instead robbed from other very famous works. This creates a very disjointed, unconnected, and honestly somewhat comical ending. The film itself also drags, mostly due to the disjointed ending.

There are two saving graces though. Jessica Mila and Bianca Hello, Alia and Abel respectively, are actually quite good in this film. Their chemistry works and their bond of sisterhood and love shines through a lot of the worse parts of the film.

Also, the practical effects looked great. If you are a fan of classics like Evil Dead or My Bloody Valentine, this film’s makeup and effects are in the same vein. If they would have just avoided the horrendous CGI, this aspect would have been the strongest of the film.

Overall, I can’t say I enjoyed the experience. I loved the beginning and was really enjoying the film, until we veered off into blatant plagiarism, and it is just that. It doesn’t feel like an homage; it feels like unoriginality. If you are a big fan of 80s B-movie gore and special effects, I would still recommend this movie, but be warned that half-way through, you may lose interest entirely.