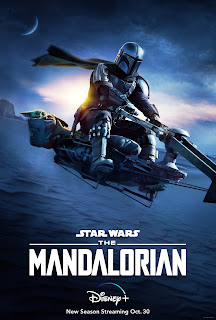 With The Mandalorian Season 2 due on Disney+ at the end of the month, Kraig Taylor-Bryant speculates on what's to come based on the trailer...

So, when it comes to a Star Wars trailer of any sorts, people tend to get wildly out of hand in terms of trailer speculation dates, I mean I was definitely fooled twice by one of two YouTubers and their “confirmation” of a Mandalorian trailer release date. Of course, it turned out that the trailer would release at the appropriate time of any TV show on a streaming service.

If you look at “The Boys” for example, the trailer for that show’s second season released about a month before the first three episodes released on Amazon Prime, I mean sure it’s not like The Boys has its own convention that would show fans a teaser of the show early. Perhaps this is what brought on the wild speculation of the Mandalorian, seeing as many people believed this teaser was going to release during the week of “Star Wars Celebration” in August (before the celebration was cancelled due to COVID 19). Regardless of all the rumours of surprise cameos (Anakin’s student Ashoka for example) in the Mandalorian leading up to the trailer release, we didn’t see any such characters in the trailer, or did we?
[Here's a look at the trailer for all those of you living inside a Taunton who haven't seen it yet - Ed]

If we take a look at the opening shot of the film it doesn’t look like much of an opening on a first watch (at least to me), however after a second and third watch a noticed that the Mandalorian's ship as it slowly passes over the planet, has the back door hatch open. Now who knows exactly what this could mean, but my only guess at this point is for whatever reason the ship has completely shut down and adrift in space, where Mando is (whether he’s still in the ship or not) is an intriguing mystery.

From this shot we cut to what seems to be a new planet, it looks to be the same dark street we see a little later in the trailer, followed by dialogue from “the armorer” (who we might remember from the first season) as a kind of voice over as The Mandalorian wonders this unfamiliar environment. From the shot of Mando we cut to him walking through the street, interestingly enough we can see graffiti on the wall, which may be associated with a character who was already rumoured to be in season 2, the Mandalorian from “Star Wars Rebels” known as Sabine Wren. Sabine famously loves to spray paint and graffiti whenever she has the time, with the most famous example being her graffiti on a Tie Fighter in the Rebels TV show. Of course, this is wild speculation and I could be wrong, but it’s certainly interesting to think about.

It would also seem we see this same planet later in the trailer which features a person dangling from a lamp post, I could have sworn that I heard the sound of a Wookiee during this shot, if this is the case Mando having a Wookiee companion would also be interesting. Mando shoots the light out from the lamp post which this could mean that he’s about to fight whoever has captured this person or Wookie. Generally, the vibe I get from this planet is dangerous and full of lowlife thugs, this could either be a new environment, or perhaps the Jedi home world “Coruscant” from episodes 1-3 following the rise and fall of the empire, in my opinion the lowlife sections of Coruscant would certainly be an interesting sight. 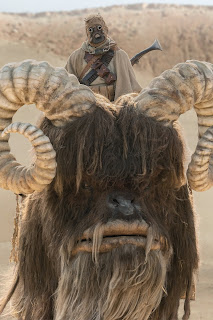 Anyway next we see a shot of Mando’s ship the Razorcrest flying over a desert planet, with one of the “sand people” riding a Bantha creature on the ground, this makes me think we’re going back to Tatooine at one point, though I really hope this turns out to be a new planet because I feel like we’ve seen enough Tatooine at this point in both the movies and an entire episode of the Mandalorian in season 1’s “the gunslinger”.

What does interest me however is the ice planet that then pops up next, which led me to speculate that this planet could be Rekkiad, a planet famous in the Star Wars Old Republic “Revan” novel. For those who don’t know Rekkiad is the ice planet where an old Mandalorian mask was buried by an ancient Jedi (turned Sith) called Revan, in an attempt to end the Mandalorian wars (in which the Mandalorians intended to take over the galaxy). The mask that was hidden is worn by the leader of the Mandalorians who is named “Mandalore”, however the mask being hidden caused infighting over who should be leader, and therefore ended the war. I honestly feel like having this as a part of official Star Wars canon again would be a welcome sight, and a perfect fit in with this show. I also know that the co producer of “The Mandalorian”, Dave Filoni, also worked on Star Wars The Clone Wars, a show that Filoni had no issue with bringing “expanded universe” characters into main stream Star Wars, as he already brought the ghost/spirit of an ancient Sith lord into The Clone Wars through Darth Bane (in season 6). It’s also interesting that the armorer's voice over mentions “Mandalore the great” while this shot is being shown, again though, this could just be my wild speculation.
The armorer goes on to mention battles between Mandalore the Great and enemy sorcerers called Jedi, it’s interesting that halfway through the quote we cut to this strange water world of sorts. I say water world because not only does it look like a shipping dock for the boat that we see later in the trailer, but we also see an assortment of water-world creatures (called Quarren) that are often associated with Admiral Akbar’s home planet of Mon Cala. With Dave Filoni’s knowledge of Star Wars lore, I wouldn’t be surprised if that is the planet we’re seeing here.

We then cut to witness a mysterious figure in a hood who is next to some crates in one shot but then completely disappears in the next. The fact that this shot is so close to the mentioning of the word Jedi makes me think this figure is associated with the Jedi, perhaps this is the character “Sabine” I mentioned earlier, as she was a Mandalorian that became friends with the Jedi Ashoka Tano, who was also pretty much confirmed to make an appearance in this show. Of course, this next question would be what leads them to take a boat later in the episode, perhaps Ashoka is hiding out on an island on this water world like Luke did in the Last Jedi, I guess we’ll have to wait and see.

A number of other minor shots are shown, some shots showing imperial ships, troops and speeders, however I guess there is a question of the two X-wings next to Mando’s ship in one shot. Perhaps this is Ashoka and Sabine in these ships or maybe Mando enlists the help of the “New Republic”, I mean when a galaxy of bounty hunters is chasing you it would make sense to look for help wherever you can. 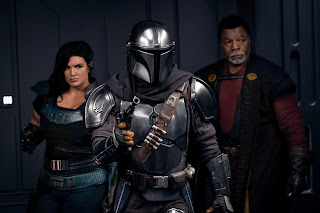 We also see a confirmation that Mando’s old friends Greef Carga and Cara Dune will be making a return which isn’t too much of a surprise, but what’s also interesting is the shot of a ship on fire and entering the atmosphere of a planet, I suppose the big question would be which planet the Mandalorian's ship crash lands on, as in this shot it seems pretty clear that it’s the Razorcrest on fire, it seems like a Mandalorian cliché now that his ship gets broken or damaged but perhaps this damage is more permanent, and Mando has to use the boat that we see on the water planet, for transportation, I guess we’ll have to wait to find out.

Finally, I can’t possibly forget to mention the final scene of the trailer, where we enter a shady fighting arena of sort, which could be the same planet as the street environment we saw earlier. In the scene we witness to Gamorreans (the species of guard that once protected Jabba the Hutt) fighting it out in a boxing arena, where Mando seems to be attending a meeting with an old friend, before being double crossed, probably for the bounty on his and baby Yoda’s head. Of course this then leads Mando to bring out his “whistling birds” weapon that we see used in episode 3 (titled “the sin”) of season 1, before baby Yoda hides in his cot and we cut to black, hearing Mando killing everyone before finally seeing him throw a knife at the last hunter.

I think this season's teaser does a much better job than the first season trailer did on raising questions about what’s going to happen, perhaps this is more because of the leaks/rumours surrounding the Mandalorian cameos, but I think this trailer certainly had a wider variety of locations to show off, which I’m definitely excited for, as well as all of the mysterious new characters. I think this trailer has definitely made the long wait for the trailer and the second season worth it, as this definitely looks like the first season was building towards something spectacular, and I for one can’t wait for the end of October.
Catch up with The Mandalorian Season 1 and get ready for Season 2 on 30th October on Disney +