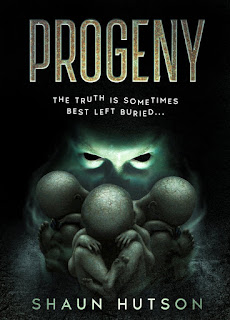 British horror legend Shaun Hutson has released a new hardback novel, Progeny, a sequel that was 37 years in the making...
Press Release
Can you imagine what it would be like not to have any memory of your first ten years of life?

Jake Howard knows how that feels. He's a successful psychiatrist and writer. He has an apparently adoring lover and the respect of his peers. But he also has a huge gap where his childhood memories should be. What's more, Jake is tormented by the worst kind of nightmares. Nightmares he's not even sure are his.

Tormented by dreams and visions that threaten his sanity, he must find their source in order to understand and banish them.

His hunt will take him to a run-down seaside town, to the place where he was raised and also forty years back in time, to what he must confront to release himself from the grip of the visions and also to discover the hidden memories.

However, he will discover things about himself he did not dare imagine. Things he really didn't want to know.

And he will also discover that not everyone is what they appear to be. Those revelations will expose a darkness and horror that no one should have to confront.

Sometimes a lie is preferable.
Progeny is the long-awaited sequel to Shaun Hutson's 1983 bestselling novel, Spawn [nothing to do with the Todd McFarlane comics character - Ed]. Publishing company Caffeine Nights commissioned the original cover artist for Spawn, Mark Taylor, to design the cover for Progeny. The artwork pays homage to Spawn while presenting a totally new book with a lovely classic horror retro feel.

“Progeny works as a stand-alone novel, but for fans who have read Spawn, there is a whole back story there that adds another level to reading Progeny. I always wanted to go back and revisit some of my earlier work and see how I could develop the work over 35 years later. Spawn was always one of those stories that was left with strands that could be picked up and spun into something more horrific than the original.” Shaun said. “I also loved the irony of a book being spawned from the original that really is its progeny.”


Progeny is Shaun Hutson’s thirty ninth horror novel under his own name and is published by Caffeine Nights Publishing with eBook and audio versions.