CLASSIC DOCTOR WHO ON BRITBOX – The Curse of Fenric 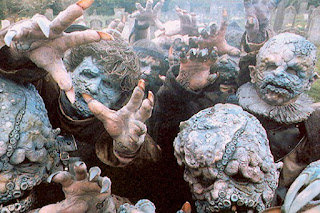 On 26th December 2019, 627 pieces of Classic Doctor Who content were made available to Britbox subscribers. Every Sunday in 2020, our Doctor Who expert, Tony Cross, looks back at some of the classic stories. Today is the Seventh Doctor adventure The Curse of Fenric...

The Curse of Fenric is an excellent story. The peak of McCoy's darker Doctor and the culmination of a story arc that we did not even know was there, going back - all the way back - to Iceworld and the Doctor's first meeting with Ace. Ace is a link in Fenric's chain of revenge. One of his 'Wolves', if an unknowing one and the Doctor always knew, apparently.

This is a story about faith and love. Ace's faith in the Doctor and her love - or not - for her mother; Sorin's faith in the Revolution, the Rev Wainwright's faith in a good God buckling under the realities of total warfare, Judson's faith in logic and science and Millington's faith in ultimate victory (and perhaps his love for Judson, although I'm reading lines within lines there) and finally the Doctor's faith in Ace.

It's nice when a Doctor Who story can be read on more than one level. After all, on the surface this is just another Vampire runaround. With added World War Two. Ace gets to be Buffy before Buffy. Well, a bit. But there are undercurrents. (Some of which may be expanded later if I can persuade...well, let us leave that for another time).

It's another excellent set of performances from the main guest stars. Dinsdale Landen as Dr. Judson, the crippled scientific genius with his bullying, patronizing Nurse Crane (played by the wonderful Anne Reid), is suitably sharp and unpleasant. He, like Alfred Lynch's Commander Millington, is clearly more focused on the ends rather than the means. Alfred Lynch's performance makes Millington's journey from the fringes of sanity into madness scarily believable. The scene where he locks the doors on the two Russian soldiers and his self-justification for it is a real blinder. There's an intensity to both Millington and Judson.

Then there's Nicholas Parsons as Rev Wainwright who puts in a - surprisingly - good performance. Here is a man battling to understand his God in a world where God seems to have gone on holiday. Nicholas Parson has got such a recognizable voice though - especially for someone who has listened to lots of 'Just a Minutes' - that it is hard to think of him as a character but it is a credit to him that (most of the time) you do forget.

Sylvester McCoy is good here too, especially in the final scenes with Ace. You do believe that this is a Doctor capable of being a total bastard and who can out-manipulate even the most sophisticated of games players. One step ahead, even when he's behind. It is something of a joy to remember quite how much I like the Seventh Doctor whilst revisiting the era. There so much depth to his performance.

Again though Sophie Aldred does a grand job with Ace. The scene when she berates the Doctor for not telling her stuff is short but magnificent; the 'faster than the second hand on a watch' stuff is mesmeric (even if it doesn't really make much sense) and her responses to the Doctor's 'teenage psychology' are exceptional. Ace is a wonderful companion, especially as they lose some of the more rubbish attempts at making her 'down with the youth'.

The Haemovores look great, especially the Ancient Haemovore. The nice way in which Haemovores change from human looking to a more...amphibious...look is a positive too. The music by Mark Ayres helps the mood, rather than stomping all over it. The World War Two setting means that the BBC's strengths are shown again - no dodgy attempts at designing the future on fifty quid required.

My one quibble is that the chess move required to win the game IS NOT A BLOODY CHESS MOVE but I suppose trying to create a virtually unsolvable chess problem that you can turn into a metaphor is a big ask.

So to conclude all hail The Curse of Fenric: mud, blood and teenage psychology.