CLASSIC DOCTOR WHO ON BRITBOX – Dragonfire 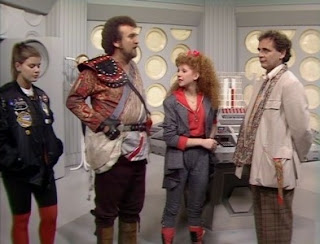 On 26th December 2019, 627 pieces of Classic Doctor Who content were made available to Britbox subscribers. Every Sunday in 2020, our Doctor Who expert, Tony Cross, looks back at some of the classic stories. Today is the Seventh Doctor adventure Dragonfire...

So, Season 24 ends on something of a high with Dragonfire. It isn't perfect but by the standards of Season 24, it is a masterpiece. I know mocking Season 24 is like shooting fish in a particularly small barrel but it is not Doctor Who's finest hour.
I don't blame Sylvester McCoy for this. I like his Doctor so far. He is capable of doing good stuff when given the right material. The end sequence when he's saying farewell to Mel and inviting Ace on board the TARDIS is perfectly pitched. As is his final confrontation with Kane (Edward Peel). Yes, there's a little too much slipping and sliding about in this story and yes, the cliffhanger at the end of part one is the stupidest in the show's history but apart from that, I think he's pretty good. Also, as I said a couple of stories back, McCoy shows the Doctor's mind working. You can see him think. I like that.

Dragonfire sees the departure of Bonnie Langford as Mel and her replacement with Sophie Aldred as Ace. I have said all I intend to about Bonnie Langford but she is not too bad in this. A little-toned down and a little sidelined if truth be told. Sophie, on the other hand, is a breath of fresh air. Whilst there are some slightly off moments and the 'down with the kids' style slang can be a bit wearing she does a fine job. Here is a companion with a bit of depth. A woman with issues. She is not easily cowed carries homemade explosives in her bag and does a fine line in minor verbals. We will see how she works out but already she feels more in sync with McCoy's Doctor than Mel ever did.

It is nice to see Tony Selby return as Sabalom Glitz even if - once again - he's an odd character tonally. It is all banter and bluster on the one hand but then we discover he's sold his crew to Kane. It is a bit thrown away really and although initially, the Doctor seems to disapprove it doesn't take long before he's wheedled himself back into the Doctor's good books. Although perhaps leaving him in Mel's company at the end is the Doctor's punishment. It isn't the most convincing of reasons for Mel's departure and you'd expect Glitz to dump her on the nearest planet he can. But Selby's performance is as entertaining as it was in Trial.

I also liked Edward Peel's portrayal of Kane. The villain as a romantic anti-hero. He's nasty, ruthless and fixated on revenge for his exile and his lover's death. The perfect illustration perhaps of revenge as a dish served cold. The scene where he tries to convince Ace to take his coin and join the ranks of his mercenary army is chilling. No pun intended. It's made more effective by the fact that Ace's possible fate is foreshadowed by Belazs's (Patricia Quinn) story.

There's not much of a plot: ice-cold villain seeks to escape from prison in order to wreak his rewenge on those who put him on Iceworld. The Doctor and Mel just happen to stumble into the end game.

Iceworld itself isn't the most convincing of places. It's either half-supermarket, half-studio or an impressive collection of plastic disguised as ice. The 'Dragon' itself is from the school of 'man in a costume' Doctor Who beasties. Actually, the gigantic hole in the plot of this story is quite why it takes Kane three thousand years to get around to hunting down the 'Dragon' in order to escape. Especially as it seems pretty straightforward a task.

My biggest quibble with this story is the cute child sub-plot. Why? And did the child really need to be a Bonnie Langford mini-me? That final shot of the whole story is vomitously twee. The whole sub-plot could be removed from the story and it would make not a jot of difference. In fact, it would positively improve the story.

So not a bad story that ends Season 24 with a glimmer of hope. Imagine how you'd feel if Delta and the Bannermen was the last story of the season.

OK. so this isn't as good as I felt about it here. In fact - actually, it's not 'in fact' but 'in my opinion' - I'd say it is with Delta and the Bannermen my least favorite story of Season 24. And for similar reasons: it's a tonal mess. In broader terms, my first line here is an unnecessary bit of snark. Season 24 isn't great but it is - mostly - fun, which is what I ask from a Doctor Who story. Yes, the production values are a bit shaky, but when has that put us off before? Yes, I think this is a production team struggling to find their way. However, they're getting there.

Sylvester has been mostly excellent too. In this story, I like the fact that he's excited by the prospect of Dragons and Treasure Hunts. I mentioned his scene with Kane at the end, which I liked. It's a glimpse at a more ruthless Doctor. He knows he has the knowledge to break Kane and isn't afraid to do it. There's no gentleness there. It's a knife in Kane's heart.

I think I'd still stand by my comments on Bonnie/Mel and Sophie/Ace here. I wrote this original article in 2011. I don't know if I'd write 'a woman with issues' in quite the same manner now. Quite why Mel goes off with Glitz I can't quite know but I like the idea that having graduated to being arrested and chucking explosives about she's decided the time has come to let herself off the leash.

Also, on this re-watch, I have more of an issue with Glitz. This issue touches on the tone of the story. We first met Glitz again shortly after we discover he's sold his crew into slavery. Or worse than slavery as it turns out. Yet, we're supposed to see him just as a sort of intergalactic Arthur Daley. He threatens to smack Ace in the face at one point. He's a terrible human being, but somehow we're supposed to shrug all of that off. That's nothing to do with Selby's performance, which is great.

Edward Peel is great as Kane but once again Kane's an issue for the stories tone. He's genuinely nasty. He's a mass murderer. The explosion of the Nosferatu with everyone fleeing the store on board is horrible and, I'd argue, unnecessary. Meanwhile, here we go romping around the corridors of a prison/supermarket. Plus additional saccharine hideousness as the result of an annoying child actor. God, that child annoyed me this time around. And her mother. Who wonders in at the end blissfully unaware that everyone else is dead. Almost. Even now I'm cringing.

However, perhaps only Doctor Who would do a story where an imprisoned mass murderer and thief sets himself up as a supermarket magnate whilst he searches high and low for the key to his escape. The fact it took him three thousand years to escape probably makes more sense when you take into account the difficulties of running a small retail business in a competitive universe. It doesn't make much sense but it is very Doctor Who.

So, whilst I didn't enjoy this as much as I did when I wrote about it initially it wasn't awful. Mostly. I have had fun re-watching Season 24, which I really didn't expect to say.
Tony Cross is the creator of the wonderful Centurion Blog's found HERE and HERE.