CLASSIC DOCTOR WHO ON BRITBOX – Revelation of the Daleks 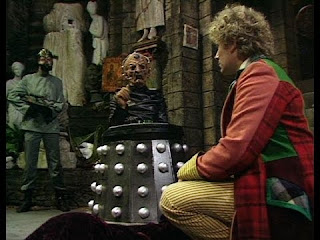 On 26th December 2019, 627 pieces of Classic Doctor Who content were made available to Britbox subscribers. Every Sunday in 2020, our Doctor Who expert, Tony Cross, looks back at some of the classic stories. Today is the Sixth Doctor adventure Revelation of the Daleks...

Revelation of the Daleks in an odd story. The Doctor is almost irrelevant to proceedings, even though his presence is desired by The Great Healer. Would anything have happened differently if the Doctor had not been there? It almost does not feel like Doctor Who at all. Part One, in particular, might be referred to as a 'Doctor Light' story if it were a New Who.

However, I love it. In my opinion, this is the best story in Colin Baker's first season. The cast is exceptional and Eric Saward seems to have learned from Robert Holmes about building great and amusing double acts: Kara (Eleanor Bron) and Vogel (Hugh Walters); Orcini (William Gaunt) and Bostock (John Ogwen); Takis (Trevor Cooper) and Lilt (Colin Spaull) and Grigory (Stephen Flynn) with Natasha (Bridget Lynch-Blosse). They bounce great and amusing dialogue off of each other. Good dialogue brings out good performances generally and that is what happens here. Add Clive Swift giving a fantastically sleazy performance as Jobel and Alexei Sayle as the DJ then you get a cast and a half.

The only bum note is Jenny Tomasin as Tasambeker who seems totally adrift. Some of her line readings are not so much wooden as just wrong. You wonder whether she actually had a clue what she was doing. It jars a bit mainly because everyone else is so good.

Terry Molloy plays Davros and it is a different Davros. He is less hysterical than usual until towards the end. Instead, we see a smarter more cunning Davros relying on his wit and words to get what he wants. He even sounds like a businessman at some points using phrases like "consumer resistance". It makes an amusing change. Why he decides to involve the Doctor when things seem to be going well is almost Master-esque in its stupidity.

Colin Baker is magnificent in this. Anyone who still thinks Colin Baker is not a good Doctor should watch this, Part Two particularly. I think Big Finish has done a great job in 'rehabilitating' both Colin and Sylvester's Doctors for which we should be grateful. The fact that Colin found himself as The Doctor at the wrong time. The BBC had almost given up on the programme and its budgets were cut to the bone. There was also a growing inconsistency in script quality, in my opinion at least. For example, Colin Baker's first season is wildly inconsistent, almost as if there was an attempt to make one bad, one good story. Even then though I do not feel Colin Baker is ever less than excellent. His Doctor might be pompous, bombastic and more violent than previous Doctors but he is Doctorish.

Nicola Bryant gets a little more action here too and there are a couple of nice scenes between her and Alexei Sayle's DJ and her reaction to being forced to kill the 'mutant' is lovely.

I have dwelt more on casting than plot because it is the cast and dialogue combined with the direction by Graeme Harper, which is up to his Caves of Androzani standards. The way he cuts to the DJ to soften some of the nastier scenes is cleverly done. There are some quite unpleasant scenes in this story: the Dalek-Stengos head, with throbbing brain, looks nasty enough but his pleading with Natasha (his daughter) to kill him before the conversion to Dalek is completed is memorably dark. As are the scenes when Natasha and Grigory are tortured and the stabbing of Kara. For once though this all seems justifiable. There is not much in the way of flippancy, which is nice. Even though a lot of people do that.

There are a couple of quibbles - the DJs death, for example, is pretty badly handled and some shots do not quite work - but overall I love this story to bits.