CLASSIC DOCTOR WHO ON BRITBOX – Timelash 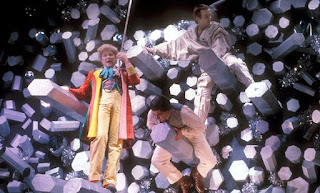 On 26th December 2019, 627 pieces of Classic Doctor Who content were made available to Britbox subscribers. Every Sunday in 2020, our Doctor Who expert, Tony Cross, looks back at some of the classic stories. Today is the Sixth Doctor adventure Timelash...

Where do I begin?

Do I begin with the flat, matt, obviously studio-bound sets topped off with tinsel, polystyrene and lightbulb Timelash? A terrifying fearsome punishment for those who rebel against [dum...dum...dah] The Borad that the Doctor can abseil into as if it were a slightly windy cliff face.

Or do I start with Jeananne Crowley's bizarre performance as Vena. Crowley gives some odd line readings whilst drifting about the place as if she is stoned. The acting in this is generally quite odd. Crowley's being fey and freaky, Paul Darrow is channelling Richard III as Tekker in one of Doctor Who's most hamtastic performances. Darrow eats, chews & spits out almost every line as if it is some foul-tasting foodstuff. It is borderline genius & frankly hilarious. Dicken Ashworth as Sezon seems to think he is in an episode of some hard-hitting cop drama and does a lot of threatening and shouting. David Ashton as Kendron - the third ex-Brass cast member in as many stories - seems to think he's in a light comedy, which isn't far wrong truth be told.

Only Eric Deacon as Mykros, Peter Robert Scott as Brunner and Tracy Louise Ward as Katz appear even vaguely normal and frankly, they get sod all to do.

But I'm being harsh. Two actors from the guest cast do a fine job. David Chandler as Herbert, who is all wide-eyed enthusiasm and Adric-esque annoyingness & Robert Ashby as THE BORAD. Ashby's buried under a lot of make-up, but his voice is amazingly dark and mellifluous. He does not go over the top, leaving that to Paul Darrow. He is a mean, nasty villain with a bit of a thing for Peri. Heaven knows what he'd have done if Peri had turned up wearing one of her leotards from earlier in the season as in this story she is surprisingly modestly outfitted.

The problem is poor old Peri is basically Penelope Pitstop in this story being literally dragged from one peril to another. I suspect Nicola Bryant did not enjoy this story as it really is the nadir of her time in the TARDIS. It is pathetic.

As is the 'oh I'm not dead, that was a clone' twist towards the stories end. I mean for heaven's sake and to try and paper over such a cliche with a clodhopping line like: "Ah but I didn't tell you about my OTHER experiment did I" is adding insult to injury.

Even Colin Baker seems to be flagging a bit with this.

Which brings me on to my main complaint about this story. The un-Doctorish five minutes taunting of THE BORAD at the stories end. It actually makes you feel sorry for THE BORAD who is effectively bullied into the Timelash by a series of playground insults about his looks from the Doctor. Yes, THE BORAD is an evil bastard but the Doctor does not do this kind of stuff. It is petty, cruel and unpleasant. The sort of thing that lesser Time Lords would sink to but The Doctor's supposed to be above all that kind of stuff, most of the time. He knew Megelan aka THE BORAD before his accident. Why didn't he try and reason with him? To talk him down?

I don't know but it means this story ends on a bit of a sour note for me despite all the faux jollity that follows THE BORAD's plunge into the Timelash.

And don't let me get started on the Bandrils.

For all its many, many flaws I do find Timelash entertaining. It is fun in a silly kind of way and it cheers me up in some bizarre way. You cannot watch Timelash and be unhappy. Probably.