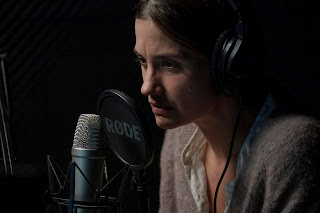 There's another reality behind the one we're living in. Watch the teaser trailer for Danish drama Equinox, coming to Netflix on December 30th...

The six part series is based on the acclaimed podcast Equinox 1985 by Tea Lindeburg and stars Danica Curcic (The Bridge, Warrior) and Lars Brygmann (Dicte) and is produced by Dorthe Riis Lauridsen and executive produced by Piv Bernth.

Equinox is a character-driven supernatural thriller about a young woman named Astrid (Danica Curcic), who is very affected by the unexplainable disappearance of her sister and her school class in 1999. The series is set in Denmark and swipes back and forth between 1999, where it all started, and the present time.

Astrid is only 9 years old in the year 1999 when a class of graduating students inexplicably disappears without a trace. Astrid, who is the sister of one of the missing students becomes traumatized and plagued by horrific visions after her sister’s disappearance. 21 years later in 2020, Astrid now hosts a late-night radio show when all of a sudden her nightmares reappear. When one of the three survivors from 1999 contacts her through her radio show and shortly after mysteriously dies, Astrid is determined to find out what happened to her sister and the class, only to discover a dark and unsettling truth that involves her in ways she never imagined.

Starring Danica Curcic as Astrid in the present day with Viola Martinsen as young Astrid, the series is written for Netflix by creator Tea Lindeburg, produced for Apple Tree Productions by Dorthe Riis Lauridsen and executive producer and CEO Piv Bernth. The series is composed of six episodes and the Lead director for episode 1-4 is Søren Balle.
Image - Netflix
Email ThisBlogThis!Share to TwitterShare to Facebook