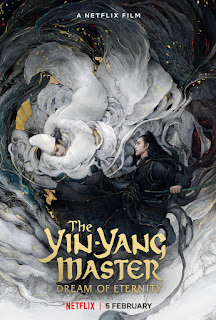 Netflix has secured the exclusive right to stream The Yin-Yang Master: Dream Of Eternity, a Chinese language fantasy film based on the Japanese fantasy novel Onmyōji...
Press Release
Scripted/directed by Guo Jingming, creator of Tiny Times, and starring Mark Chao and Allen Deng, the film is brought to fruition by Asia’s best production team and will be available worldwide on Netflix starting February 5th, 2021.
The Yin-Yang Master: Dream Of Eternity is based on Onmyōji, a Japanese fantasy masterpiece by Baku Yumemakura, with the story revolving around Abe no Seimei, the most renowned yin-yang master during the Heian period, and his fantastical encounters with demons and evil spirits. Since it was first published in 1986, the original novel has enjoyed unwavering popularity over three decades, having been adapted into comic books, films, TV series, Kabuki performances, a mobile game, and hailed as one of the most popular contemporary Asian IPs.
The Yin-Yang Master: Dream Of Eternity opens with young yin-yang master Qingming (Mark Chao) traveling to The Capital on his master’s orders, where he attends a Heaven ceremony. Qingming is tasked with sealing a demon serpent for good, preventing the demon serpent from waking from its 300-year slumber and plaguing the people once again. However, the now released demon serpent is mighty and powerful. Qingming, together with a warrior named Boya (Allen Deng), Master Nanjiang (Jessie Li), and Master Heshou of the Imperial Observatory (Wang Duo), team up to eliminate the demon serpent. In the midst of turmoil and crisis, an earth-shattering conspiracy involving the princess (Wang Ziwen) begins to surface.
Director Guo Jingming said, “I’m excited that The Yin-Yang Master: Dream Of Eternity will soon be introduced to global audiences on Netflix. My biggest takeaway from adapting such an oriental aesthetics classic is how to work with the creative team to visualize such a mysterious, elegant, yet dangerous and challenging oriental world in all aspects. I hope Netflix members will enjoy the world of The Yin-Yang Master and find their own fun in this fantasy journey.”

The contrasting personalities of protagonists Seimei and Hiromasa have long been hot topics among fans of the novel. Mark Chao, who plays Qingming (Seimei), said that ”in order to prepare for the role of Qingming, I re-read the original novel and re-watched the Japanese version of the movie. As the classic interpretation cannot be surpassed, I had to find a different path. In the end, after working with the director, we found an eccentric, black-bellied Qingming, paired with rigorous martial arts training, hoping to deliver a refreshing experience to new viewers and old fans through the global platform of Netflix.”.

Allen Deng, who plays Boya (Hiromasa), added that “The Boya I played is brave and a great fighter on the surface, but in fact has simple thoughts. He sympathizes with Qingming, who shares the same sufferings as he does, but Qingming also killed his mother. The entanglement of love and hatred between these two characters leads to major changes in Boya's personality. What I remember the most was a fight scene between them. We filmed for ten consecutive days without a substitute, supported each other in and out of the scene, and developed a strong brotherhood. I hope Netflix viewers will like this truthfully recreated yet reshaped world of The Yin-Yang Master.”

The Yin-Yang Master: Dream Of Eternity brings together Asia’s most talented creators and cast with the ambition of recreating a classical oriental fantasy. Scripted and directed by Tiny Times creator Guo Jingming, Dream Of Eternity boasts a strong cast that includes Mark Chao, Allen Deng, Jessie Li, Olivia Wang, and Wang Duo. Also working on the film is Asia’s top production team, which includes Japanese composer Kenji Kawai (Ghost in the Shell), Korea’s leading special effects company 4th Creative Party (Okja, Snowpiercer), renowned Taiwanese designer Jamie Wei Huang (Tiny Times) and her team, and Artistic Director Nan Tu (Legend of the Demon Cat), who is working on a creation based on Baku Yumemakura’s novels for the second time now. Together, this formidable cast and production team breathe life into the fantastic world of Dream Of Eternity.