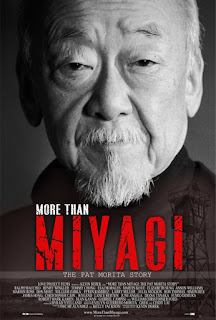 Providing a fascinating retrospective of an actor who became a pop culture icon, watch the trailer for the documentary More Than Miyagi: The Pat Morita Story...

The Oscar-nominated actor best known for his role of Mr. Miyagi, left behind a painfully revealing autobiographical record of his much-too-brief time here on Earth, tracing his journey from being bed-bound as a boy to the bright lights and discrimination in Hollywood. Deep inside that sweet, generous, multi-talented performer seethed an army of demons, that even alcohol and drugs couldn't mask.

Directed by Kevin Derek, the documentary features interviews with Ralph Macchio, William Zabka and Martin Kove, who are carrying on The Karate Kid legacy with Cobra Kai. Also featured are stars from Morita's Happy Days days when he was the eponymous Arnold, the owner of Arnold's Diner that Henry Winkler, Marion Ross, Don Most and Anson Williams frequented as well as interviews with Hollywood greats James Hong, Sean Kanan, Esai Morales, Tommy Chong and more.

More Than Miyagi: The Pat Morita Story is available to rent in the UK via iTunes, Amazon, YouTube, Google Play and Vimeo.