Film - Memories to Choke On, Drinks to Wash Them Down 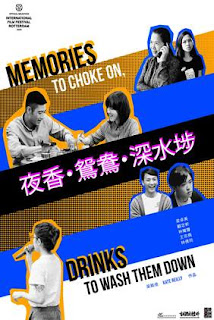 Tony Cross watched Memories to Choke On, Drinks to Wash Them Down as part of the recent Focus Hong Kong film festival...

Memories to Choke On, Drinks to Wash Them Down is a series of four short, contemporary Hong Kong stories directed, written, and produced by Kate Reilly and Ming-Kai Leung. Kate Reilly also appears as an actor in the film, which makes for a nice full set of credits.

It is an interesting structure, that tells the story of a city in transition. Three of the stories are fictional, focusing on that kind of transition. The first – Forbidden City - features two immigrants into Hong Kong: an elderly Chinese lady suffering from dementia who tells the same stories repeatedly to her Indonesian carer, Mia. The second – Toy Stories – is about two brothers who return to their mother’s toy shop, which (possibly) about to be sold and is also about change, memory, and relationships. The third – Yuen Yeung - is the story of two teachers, one from Hong Kong and one from America and how their relationship develops overtime before looping back to the beginning.

Indeed, looping back seems to be a fixture of a couple of the stories but once again I might be seeing patterns where there are none.

The final story – It’s Not Gonna Be Fun - is the one that perhaps drives the films point about a changing Hong Kong home, is a documentary. Initially, I thought it seemed weirdly out of place, this reality in amongst the fiction, but it helped anchor the fiction in the reality. It is the story of Jessica Lam Sin-Tung, who is running as a candidate in Hong Kong’s local elections against a pro-Chinese candidate. Jessica is not your normal political candidate, which makes it more interesting. She seems not to want to win and beats herself up a bit for not being more involved in the protests. I do not think I have come across a film before that mixes up fiction and documentary quite like this.

The stories are interesting. The second, Toy Stories, even ends with a ‘To be Continued’, as opposed to having a final ending. Indeed, none of these stories have an end in the most obvious sense. Like real life.

I really enjoyed this. It was not perhaps what I was expecting at the beginning, which is an interesting change. I like being surprised, especially when the surprise is a pleasant one.

The acting in the three fictional stories is great. I particularly liked Leong Cheok-Mei as the old lady Lam Chi Yin in Forbidden City and Gregory Wong in Yuen Yueng, but there was excellent acting everywhere. Again, as the regular reader of my reviews will note, I like performances where the emotion is not in full display and stories where things that happen between the lines are as important as the things that happen right in front of us and this is one of those films.

Its tone is intimate and gentle, but it makes big points, not just political ones but ones about change, communication, and relationships. The little things that mean a lot. I will be interested to see what Kate Reilly and Ming-Kai Leung do next. I wonder if we will see Toy Stories ‘to be continued’ picked up at any point?
Follow Tony on Twitter @Lokster71
Image - Focus Hong Kong
Find out more about the Focus Hong Kong Festival
Email ThisBlogThis!Share to TwitterShare to Facebook