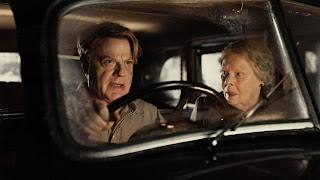 Based on true events, and premiering on Sky Cinema and Now TV in the UK next month, watch the trailer for Six Minutes to Midnight...
Press Release

Summer 1939, Hitler’s power is growing and tensions between the UK and Germany are at boiling point. The Augusta Victoria College, a finishing school for daughters and god-daughters of the Nazi elite on the south-coast of England, is under close scrutiny after the mysterious disappearance of their teacher Mr Wheatley.

The school governess, Miss Rocholl (Judi Dench), hires journeyman teacher Thomas Miller (Eddie Izzard) to replace Wheatley and help prepare the girls for the Anglo-German fellowship. Thomas slowly raises the suspicions of Ilse Keller (Carla Juri), the girls’ German tutor, who has secrets of her own. Caught in the crossfires, Thomas is framed for murder and goes on the run to clear his name and uncover Ilse’s true plan for the girls. Can he stop her before it’s too late?