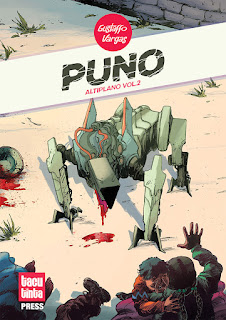 Susan Omand heads for the highlands (of Peru!) as she read PUNO, Volume 2 of the Altiplano series by Gustaffo Vargas...

I remember being intrigued by the idea of Peruvian Cyberpunk when we covered Gustaffo Vargas’ kickstarter for PUNO late last year [here] so I was really pleased to get the chance to sate my curiosity and try the comic for myself now that it’s out in the wild. And it’s even better than I had hoped!

One thing I must say upfront, so to speak, is that this Peruvian Cyberpunk adventure is definitely not for children as the violence is bloody, the language is strong and the sexual aspect is graphic, although none is gratuitous and it all furthers the plot. The story follows Lila, who is trying to escape from her past, while being pursued by a corrupt politician and a secret agent, who are trying to find the source of a very powerful force that she is somehow connected to. There’s explosive drama throughout as Lila is willing to literally do whatever, or whoever, it takes to avoid capture.

I’m a big fan of subtitles being used on films not in the English language, rather than crappy over-dubbing, so I loved the fact that some of the dialogue in the comic was written in Aymara, an official language of Peru, but I also appreciated the fact that a different typeface was used for the Aymaran, along with a translation into English, as this helped me keep track of the characters and story while adding an air of authenticity. 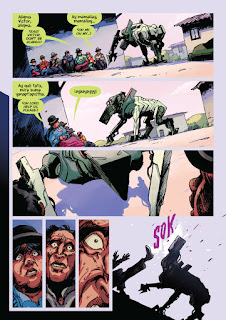 Talking of characters, a very nice addition is the behind the scenes character bios and other info at the end of the comic explaining why some characters are designed as they are and giving more information about the locations, creatures and their links to the folklore of the area, including the importance of the first scene in the comic, which is, indeed stupendous. The art in that scene is amazing, with great attention to detail in the indigenous costumes, but the thing that really struck me about the interior art of the whole comic is the colours! It looks gorgeous! The rich vibrancy of the palette helps to convey the heat of the environment (the pinks and greens of the club scene are stunning) combined with the psychotropic effects of the drugs involved and these contrast well with the cool blues and whites of the command centre and the monochromatic greens of the flashback. I also really liked the variety in panel layout, with each page being comprised of different shapes and sizes of panels while still maintaining a logical flow that made them easy to follow.

I hadn’t read Altiplano Volume 1, Manu, before going in to this one (something I have since remedied, having got the Peruvian cyberpunk bug now) but, to be honest, I don’t think that mattered too much. I was able to get the gist the story pretty well just on this comic, thanks to some nice use of exposition which didn’t feel shoe-horned in, without the additional background and character building that Manu gives you. It does seem, though, to be quite a complex tale with several strands still to pull together but, for a “middle book” in a trilogy, it still stands well on its own and leaves the story on enough of a cliff-hanger that I’m looking forward to Volume 3 now to see how it ends up.

PUNO and all the other Peruvian Cyberpunk books can be bought at:
https://gustaffovargas.bigcartel.com/
Images - courtesy Gustaffo Vargas
Email ThisBlogThis!Share to TwitterShare to Facebook