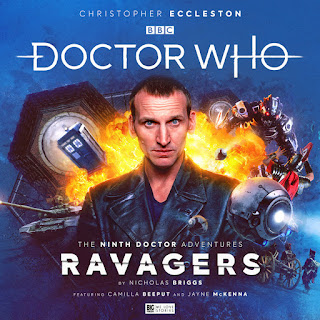 More information has been revealed by Big Finish for the first volume of Doctor Who – The Ninth Doctor Adventures starring Christopher Eccleston...
Press Release

Due for release in May 2021, Doctor Who – The Ninth Doctor Adventures: Ravagers features three tales written by Big Finish’s Creative Director, Nicholas Briggs, and sees the Doctor on a voyage of discovery once more with new friends and adventures.


On the Sphere of Freedom, the Doctor is about to shut down an evil Immersive Games business empire. He’s assisted by a valiant galley chef called Nova. But his plan spectacularly fails...

Now, the Doctor must fight back to discover what could have caused everything to go so badly wrong. His journey takes him via Piccadilly Circus in 1959, Belgium 1815 and far flung future worlds where machine intelligences regard sentient life as mere biofuel.

Where does the mysterious old-timer Audrey fit in? Is the alien beverage Charganzi safe to drink? And is there really anything the Doctor can do to stop the entire universe from being devoured? 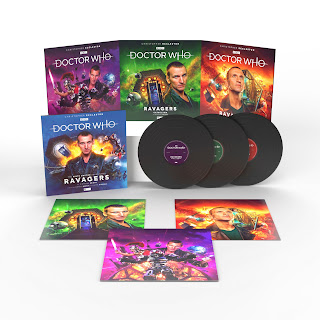 The three terrific tales are as follows:

On the Sphere of Freedom, the Doctor is about to shut down an evil Immersive Games business empire. He’s assisted by a valiant galley chef called Nova. But his plan spectacularly fails... And who exactly is Audrey?

Nova is dislocated in time while the Time Eddies are out of control. Meanwhile, the Doctor is about to face the end of the universe. Or is that just the Battle of Waterloo?

The TARDIS is starting to get a little crowded! Audrey finds herself haunted by a ghostly Doctor.


Of joining the TARDIS as Nova, Camilla Beeput said: “I mean, it’s Doctor Who, isn’t it? It’s iconic! It’s very energetic, it’s full of action which I really enjoy doing. And Nova is a very spunky, sparky character, she’s got a lot of attitude, she’s a lot of fun. And Chris is great, he’s so warm and friendly – the kind of person that I instantly felt like I'd known for ages, he’s got such an enveloping warmth about him.

“It's just such a lovely environment you feel very safe working with someone like Chris who’s such a consummate professional – and that’s what it’s all about!”

Jayne McKenna added: “I loved the script – it's the first time I’ve been in something like this, it’s just fantastic! What’s lovely is working with people that are so invested in this, and having a chance to play a character at different stages of her life – that’s a great gift to be given as an actor. Everybody we’re working with, all the cast and the people that’s working on this, are so brilliant and efficient at their jobs, that it’s felt like we’ve been flying – everyone's loving doing it!”

Big Finish listeners can save by pre-ordering a bundle of the entire series for just £88 (as a collector’s edition box set) or £78 (as a download).

Doctor Who – The Ninth Doctor Adventures triple LP vinyls are strictly limited to a pressing of 1,000 per volume, and can be pre-ordered at £35.99 each, or £132 for the bundle of all four albums, again exclusively at the Big Finish website (www.bigfinish.com).

Please note: the vinyl editions do not include any behind-the-scenes extras. However, listeners purchasing vinyl LP editions will receive a download of the story automatically and be given access to the CD edits as a bonus download. Episodes will be edited specifically for the vinyl format, presented as 2 episodes, one on each side, each with opening and closing music. In addition, all pre-orders of the vinyls will also receive the behind the extras as a bonus download.

Big Finish is currently operating a digital-first release schedule. The mail-out of collector’s edition CDs and limited edition vinyl LPs may be delayed due to factors beyond our control, but all purchases of this release unlock a digital copy that can be immediately downloaded or played on the Big Finish app from the release date.